I wish I could tell you about the latest musical escapades in our family.  But, sometimes, words just cannot do justice.

And so I will show you.

Or, rather, my kids will show you.  Be forewarned; this music is dangerously and obscenely catchy.

One guess which song has been stuck in my head over the past week.

Thanks for that, Justin Bieber.

I learned a long time ago that I am not a Wiggles soundtrack kind of mom.

Not that I’m knocking The Wiggles, by any means.  I think they’re fantastic.  But there’s only so many times you can hear the same songs played over and over again before your brain starts to turn into cold spaghetti.  Personally, if I hear The Wiggles too many times, I start to want to bang my head into the steering wheel, smashed banana style.

The point is, when my kids and I are in the car, we listen my my music.  But I usually filter the selections so they don’t hear anything that might be picked up by young, curious little ears.

For instance, sometimes we listen to the Dixie Chicks.  But I always fast forward past “Goodbye, Earl.”

Sometimes it’s old-school country.  My son rocks “The Ring of Fire” like nobody’s business.  And, yes, sometimes there are questions asked about why there is a boy named Sue.  We work through those issues as they arise.

And sometimes, when dad’s in the car, we listen to butt-rock.  I don’t worry too much about filtering those songs.  Really, if I can’t understand a word they’re saying in those Def Leppard songs, I’m not worried that my kids will.

But sometimes, when I’m zoning out in the car, I forget my mom filter.  Such was the case the other day when Bobo and I took a short roadtrip.

When Madonna’s Immaculate Collection started blaring in iPod shuffle mode, I was jazzed.  We got Into the Groove.  We rocked out to “Holiday” and “Lucky Star.”  Bobo loved “Material Girl.”  You know, because we live in a material world.

But the tone took a more serious note when the next song started playing.  You know.  That song.

I hadn’t even realized what was on.  But I immediately snapped back into focus when the question piped up from the back seat:

“It’s a strawberry daquiri made for kids!”

“It’s an undiscovered piece of land.”

“A name of a record label.”

“If your father has anything to say about it, what you will be until the ripe old age of 40.”

Sadly, none of these definitions popped into my head at the time.

Instead, I floundered.  I panicked.

Instead of brilliance or insight, what popped into my head was, “I think she said Like a Merman.”  And I promptly switched over to another song.

I know.  I’m obviously no rhymer.  But it was the best that I could come up with in my flustered state.

Fortunately, though, this satisfied my daughter.  She had seen The Little Mermaid, so maybe this made sense to her.  And, for the rest of the car ride, there were no more questions asked about virgins.  Or Mermen, for that matter.

But when I got home, I realized I need to refine my iPod selections again.  And I immediately started creating a playlist suitable for small ears.

I may have even thrown some Wiggles in there.

Because sadly, I might have to admit.  Maybe The Wiggles aren’t so bad after all.

I should have known what I was getting into when I married him.

I was aware of his penchant for rock bands and heavy metal.  I knew of his love for playing the air guitar around the house.  I had listened to him serenade me with power love ballads.

I knew he was a butt-rocker.

But what I didn’t know?  Is that when your beloved is a butt-rocker, it will affect your offspring.  Your children will slowly begin to acquire a taste for the stuff as well.  It doesn’t matter how much you shelter them, or immediately try to switch the music over to the Wiggles soundtrack when they are in the car.  Sometimes thing slip.  Those grating guitar riffs – and the lyrics that accompany them – will find a way to your child’s ears.

And they hear all.

When your beloved is a butt-rocker, your kids might prefer Van Halen over Dixie Chicks.  If you happen to be a country fan, you may desperately search for ways to rectify that injustice.  To no avail.

When your beloved is a butt-rocker, your kids may be confused about who Cinderella really is.  Sometimes it’s a beautiful blue princess; other times, it’s a big hair band reliving the glory days of the 80’s over and over again.  This will cause jealousy and mayhem when dad announces he’s going to see a Cinderella concert… sans kids.

Your children may run around the house screaming, “I AM IRON MAN.  DEE-DEE-DEE-DEE-DEE-DUM-DOO-DEE-DEE.”  All while practicing their air drum flair.

Your daughter may suddenly belt out the chorus to “Livin’ on a Prayer,” in public, causing you to want to hang your head in mortification.

Your kids might see a man sporting a mullet, acid washed jeans and eyeliner, and think nothing of it.

When your beloved is a butt-rocker, he might want to name the family car “Axel.”  After Guns n Roses.  Because he thinks it’s funny to break out into “Welcome to the Jungle” every time you load the kids up into the car.

And to trump it all, when your beloved is a butt-rocker, he may buy your kids clothes like this. 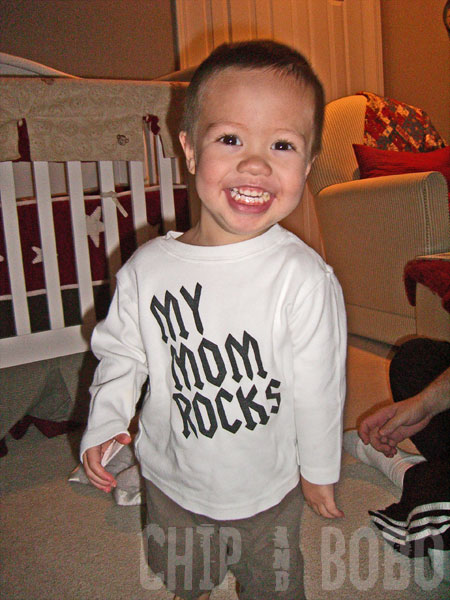 And even though you groan a little inside when they wear it, you can’t help but think it’s cute. So you laugh, shake your head, and let it slip by.

And you admit should have know what you were getting into… when you married a butt-rocker.

I confess, I am guilty of driving under the influence. And no, I’m not referring to the controlled substance kind. I mean the kind that probably most parents have experienced at one time or another: Driving Under the Influence of Kids, or DUIK.

You hear all the time about the dangers of using mobile devices while driving. Earlier in the year, Oregon passed a new hands-free mobile device law. And I am totally on board with all this. The yahoos that drive and simultaneously text/talk on the phone/surf the internet rank high on the list of my own personal pet peeves.

That said, the irony of all the research and controversy over car mobile devices does not escape me. Frankly, I’ve found that driving with munchkins in the car CAN be, and oftentimes IS, exponentially more distracting than any cell phone conversation I’ve ever had.

Driving under the influence of kids is usually not without at least a little excitement. Some familiar hazards of the road include:

This isn’t to say I don’t enjoy driving with Chip and Bobo. The above driving hazards aside, my kids are actually pretty good car travelers. We’ve also learned a few tricks of the trade, including burning a CD of eclectic ” mood music” we like to rock out to (J has been giving the kids air guitar lessons), as well as having a stash of movies, toys and snacks close at hand at all times.

And sometimes, if the stars are aligned just right, the view from the rearview mirror can look pretty sweet. 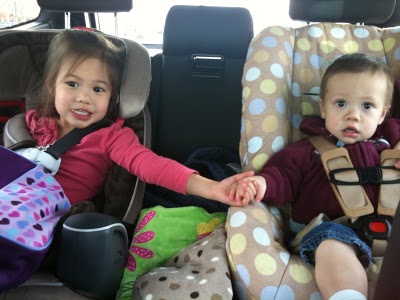 Ironically, this is an actual picture taken from my phone while in the car with the kids one day. Yes, I was driving. No, the car was not in motion at the time.