I’m laying on the ground, staring out the door at the big, blue sky.  The air has a sultry, sticky feeling to it.  Outside, I see fleeting glimpses of palm trees, huts and a strange looking animal that resembles a cow.  A water buffalo.

I’m aware of the filth, the noise, and a slightly moldy, dank stench that permeates the air.  I see someone enter the building where I’m laying.  They are dressed in rags, and are wearing a funny looking cone-shaped hat.  They stop in a corner, squat, and urinate.

And then the dream stops.

I wake up, and realize I’m dreaming about Vietnam again.

I’ve had The Dream for as long as I can remember.  It’s one that’s come and gone throughout my 30 some years of life.  I’ll go for a year or so without having it, and then the images will appear again in my mind, as crisp and as clear as if I were actually there.  The details of The Dream never change.

Some days, The Dream is the only thing that reminds me of how I appear outwardly to others.  Asian.

I came to the U.S. when I was only four months old.  I was adopted into a white family, in a town about as  ethnically un-diverse as they come.  To say I was a minority would have been a grave understatement.

But I didn’t see it that way.  Because in my mind, it wasn’t a factor.

When I looked around me, I saw parents and family who loved me as if I was born of their own flesh and blood.  I saw siblings who only cared whether or not I was crossing the invisible middle line in the car… and if so, I’d better stop… or else.  I saw a regular suburban kid just trying to get through adolescence intact.

But not everyone saw me that way.  When they looked at me, they only saw a person with jet black hair and almond eyes so very different from their own.  Some immediately stereotyped me as someone who was good at math and knew how to use chopsticks.   And still others labeled me as someone who was yellow on the outside, but white on the inside.  A Twinkie, they called me.

I’ve experienced prejudice, stereotypes and labeling.  And every time I did, it always jolted me back into reality a little.  Because often, the only times I was cognizant of my Asian heritage was when I looked in the mirror.  Or when I had The Dream.

Oddly, since I’ve become a parent myself, I no longer have The Dream.  Perhaps it’s because every day I look into two little faces so like my own, and I no longer need subconscious reminders of the person I am outwardly.

Or, perhaps, it’s because I now have different dreams.  Ones reserved especially for my children.

I dream that they will not be pigeonholed into acting a certain way based on what they look like.

I dream that they never hear the term “Twinkie” except for when it’s mentioned the context of a delicious, artery clogging dessert.

I dream that they remember who they are genetically – 1/4 Chinese, 1/4 Vietnamese, and 1/2 all funky white boy – and embrace that heritage.  It’s an inextricable part of their being, and one that I am proud to call my own.

At the same time, I dream that they will recognize their heritage does not  define who they are.

We do not choose our families, our skin color or the life that we’re born into.  But all of those factors invariably shape and influence the person we choose to become.

And my children?  They will be whatever they want to be.

At least, that is my dream for them.

I love my parents unconditionally.  Both sets of parents.

It wasn’t until I became a mother myself that I quite realized that.

I was adopted at a very young age.  Growing up, I always thought of my adoptive parents as simply “mom and dad”.  Blood ties or not, they were, and will always be, my parents.  And I was simply their daughter.  We share an unconditional love that could never be invalidated or negated because I wasn’t their biological child.

But when I had munchkins of my own, I began to think more and more about my birth mother.  Some of this probably has to do with the fact that Bobo is the spitting image of me when I was little… my own personal mini-me. I still do a double take any time someone mentions how much she resembles me; it’s unfamiliar territory for me to actually look like my family members.

And thus, the physical similarities between my daughter and I have led to more reflection. Which leads to more questions about my birth mother.

Am I the spitting image of her?

Where is she now?

Did she have other children?

Has she led a happy life?

Does she still think of me?

Did I give her the same god-awful heartburn during pregnancy that my own kids gave me?

I have no answers, and probably will not ever.  But still I wonder… without any sense of bitterness, emptiness or what if’s.

I only have questions.  And gratitude.

Because she gave me life, and then had the courage to give me up for adoption.  Because she sent me to live with a family that’s given me more love than I could ever know what to do with.  Because she wanted a better life for her daughter, even though it would be a life she would never witness firsthand.

All I know is… for that, I love her unconditionally. 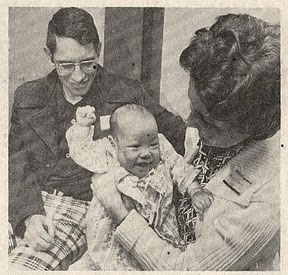 An old penpal, also an adoptee, reminded me that this week marks the 35th anniversary of my arrival into the U.S. and my family.

At four months of age, I was flown out Saigon, along with a few thousand other babies as part of Operation Babylift.  My parents, who had been waiting over two years to adopt a baby, drove up to Seattle and waited through the night, along with hundreds of other expectant parents, to meet their new little ones.

I found these old Oregonian clippings of the event that my mom had stashed away in my baby book.  (The fact that she actually did a baby book for all three of her kids actually impresses me.  My kids will likely get a shoebox filled with random, unordered memorabilia.)

35 years later, my parents are now more commonly referred to as “Grandma and Poppa,” or as Bobo calls them collectively: “Grampoppa.”

It’s never bothered me in the slightest that I look nothing like either Grandma or Poppa.  Or anyone else in my family, for that matter.  I firmly believe that family is defined by who you are loved by.  And we had love o’ plenty growing up. 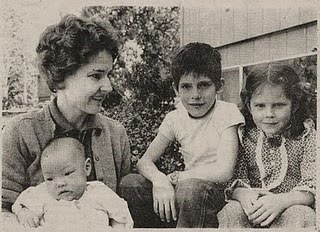 That being said, since my kids’ births, I have to say I’ve felt a biological tug on my heartstrings I’ve never really experienced before.

There’s something pretty sweet about looking into a little face that resembles parts of you and your better half.  Chip and Bobo both inherited the crazy, stick-your-finger-in-a-lightsocket hair I had when I was little, my husband’s nose, and big brown puppy dog eyes that are a mixture of both their parents.

Bobo especially takes after me.  It’s almost surreal to hear someone gush, “Oh my gosh, she looks JUST like you!”  I sometimes stop and do a double take before I realize, “Why, yes, she DOES look a lot like me.”  It’s a relatively new experience for me to actually look like members of my family.

While my kids can’t credit their wild hairdo’s to Grampoppa, they have inherited something infinitely more valuable.   The attributes I try (emphasis on the word “try”) hardest to emulate as a parent are ones that I observed and experienced directly from my own upbringing.  My dad’s silliness.  My mom’s constant encouragement.  Tolerance and patience (oh, I wish I had more of it some days).  The ability to laugh and cry in front of your kids, and the belief that you can never tell your kids you love them often enough.

It seems a little inadequate to try to sum up the feelings of appreciation and gratitude I feel towards my parents in a simple blog post.  I guess all I can say is, “Thanks, Grampoppa.”