Over time, this blog has become a creative outlet for me to express myself to a community that I’ve come to appreciate and connect with.  It’s also become a cathartic release for me.  And a way for me to use big words on days when I often just utter monosyllable sentences.

But it didn’t begin that way.  In the beginning, I wrote only for me.

I started this blog in early spring of this year.  My original intent was never to make this blog public.   It began as a way for me to capture my thoughts about parenthood and to record some of the moments my children created for me that I knew I would eventually forget.  It began as the digital baby book to replace the shoebox of memorabilia that I had never actually put in their real baby books.

And so, I began writing.  I went back and found all of the post-it note chicken scratches I had stashed away in a shoebox.  Then I painstakingly transcribed them into chronologically ordered blog posts.  And once I had that done, I wrote some more.

I didn’t post every week in the beginning.  But if something noteworthy happened with the kids that day, I’d jot it down onto a sticky so it wouldn’t be permanently lost in my mental vacuum.  And at the end of the day, it went into the blog.

I never envisioned anyone besides myself and possibly my immediate family would ever actually read it.

Anonymous changed all that.

After I had been writing for a few months, I got my first comment.  Left by Anonymous.  There was no email address.  Or link to a website.  And it wasn’t eloquently worded or verbose… just a few simple lines, and a smiley face emoticon.  But that comment changed the way I looked at my writing.

All of the sudden, I knew someone was reading.  And that knowledge has motivated me more than I can express.  When I’m tired.  Or sick of blogging.  Or simply unmotivated to put my thoughts into words.

I need to acknowledge Anonymous more often.  Because, I admit, I get caught up in numbers sometimes.  It’s hard not to.

Sometimes I’ll dash something off after I’ve had a few beers late a night.  And sometimes, the next morning, I’m pleasantly surprised to find that a) I don’t sound like a complete drunken idiot and b) there are 20 comments waiting for me.  In my book, comments are almost as good as beer.

Other nights, I’ll pour my little heart out into a post, and decree it the best thing I’ve written.  Ever.  And the next morning, I’m dismayed to find that either a) I do sound like a drunken idiot or b) there are exactly 0 folk(s) that had anything to say about it.

It makes me a little sad.  But really, it shouldn’t.  Because I know that even if they didn’t comment, Anonymous is reading.

And you never know who else is reading.  Every once in a while, I’ll run into a colleague at work, or get a note from a friend who said they enjoyed something I wrote the other day.  Interestingly enough, none of these people had ever left a comment.  Heck, I didn’t even know they knew I had a blog.  But something I had written in a semi-incoherent midnight blogging session either seemed funny enough, interesting enough, or absurd enough, that they took the time to mention it to me.

But back to the original Anonymous.  If you’re out there, Anonymous, I’d like to personally thank you.  You, my friend, are my favorite and first reader.  If you happen to be reading this, please leave me a comment with how I can get in touch with you, because I have a six pack of beer with your name on it.

I write for me.  But I also write for you, Anonymous.  Because you’ll never know how much that first comment meant to me.

As you might have surmised from my last post, Colonel Dad is out of town this week.

The Colonel doesn’t travel much, but when he does, it always makes me appreciate how good we’ve got it when he’s home.  The kids miss him.  I miss him.  And I also really, really miss speaking in sentences that use words more than one syllable long.

And, truth be told, his absences always make me realize how inept I am in the solo parenting department.  Case in point, the rebuttal telegram that was delivered to me this evening: 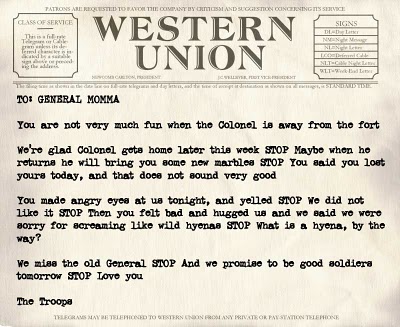 Clearly, I have not been bringing my parenting A-game to the table this week.  I’ve noticed it.  And, to my dismay, the kids have most certainly noticed it.

In all honesty, when the Colonel is out of town, I feel off kilter.  Unbalanced.  Yes, he does a lot with the kids, and helps out with stuff around the house when I need it.  But it’s more than that.

The Colonel is an integral part of what holds our little family together.  He lends patience (and marbles) when I’ve lost mine.  He’s got my back.  He makes me feel like more than just General Momma.  And he also speaks in sentences that require words longer than one syllable.  I’ve missed all that this week.

Safe travels home, Colonel.  The troops and I will be waiting for you with open arms.

This post was written for Week 3 of Kludgy Mom’s B2S/B2B challenge.  I chose the prompt from the idea bank: “Find one of your old blog posts. Rewrite it, using the perspective of someone else in your family.”

Since my kids are still little, I figured I had a few years to figure out the best way to broach the topic of the birds and the bees with them.  Apparently, I was wrong.

My first encounter with “the talk” came a few months back.  It was not planned.  And I was not prepared.

One warm spring day, we decided to go to the zoo.  Lucky for us, we went during elephant mating season.

I’d never seen an elephant willy before.  But let me tell you, it was a doozy.  To give you a mental picture:  Elephants are well endowed.  Very well endowed.  Seriously, it was like a fifth leg.

Seeing the reaction of parents was almost as much fun as watching the act itself.  Almost.  Momma hens rushed to cover their children’s eyes and shoe them away from the scene.  Meanwhile, every single one of the dads lingered, their mouths agape.  Many of the men whipped out cellphones and started taking pictures and sending them to friends.

As for me?  I couldn’t move.  In a weird way, I have to admit that I was a little transfixed.

My reverie was short lived.  “What are they doing, Mommy??” one of the kids shrieked.

Surprisingly, my own daughter had the answer.  “The momma elephant is giving the daddy elephant a piggy back ride!” she exclaimed excitedly.  I’m pretty sure I peed my pants a little when she said that.

Her comment made some of the moms giggle, and me breath a small sigh of relief.  As I watched the piggy back ride for a while longer, I felt relieved to know I’d temporarily dodged a bullet.  But after a while, Bobo got bored, and we left the elephants to make whoopy in peace while we went off to see the monkeys.  None of which were in heat at the time.

For the rest of the afternoon, I waited for Bobo to ask follow up questions about the elephants.  Stuff like, “Why do daddy elephants have two trunks?”

I rehearsed the answers in my head.  The questions never came.  Thank god.  Because, as I mentioned, I was not ready to have that talk yet.  And, I’m pretty sure, whatever answer I gave would have made me feel like a complete and total asshat.

Here’s hoping I have a few more years left before I have to think about having “the talk” again.  Or, at least until the next time we visit the zoo. 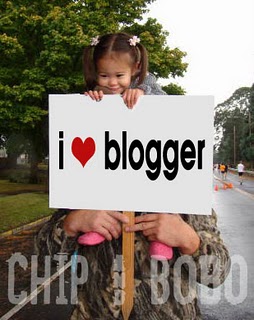 You hear a lot in the bloggy world about how WordPress is so much better than Blogger.  And to that I say, “Pshaw.”

Now, I’ve worked extensively with both platforms.  And granted, WordPress can do some pretty cool things.  But for me, the clear choice is Blogger.  Here are four random reasons why:

And I am nothing if not cheap.  The thought of paying money to self-host my blog does not sit well with me.  Because for the price of hosting, I could buy some eight cases of Bud Light.  Or that pair of shoes I’ve had my eye on.  Really, which would you pick?

Once in a blue moon,  I’ll have issues with Blogger.  Like comments will randomly disappear.  Or posts will be lost.  Or I’ll be unable to view my blog at all.

Much like the Twitter fail whale, I actually embrace these issues.  They add hours back into my day, and give me an excuse to do something besides tinkering around with the blog.  I like to look at the positives in everything.

While searching for widgets for the B2S/B2B challenge, I stumbled upon some random goodies.  I was delighted to find that Blogger has a plethora of gadgets to enhance the value of your blog.  Honestly, when you can choose between gadgets featuring Mr. T Quotes, random Winnie the Pooh images, and countdown clocks to the next Shrek movie release, it’s really hard to pick one.

However, I did find one little gem in my searches.  If you’re reading this on anything besides a reader, you may have noticed the little toolbar that displays at the top of the page when you scroll down.  I thought I’d try it out for a while, and it’s growing on me.  If you’d like to get your own, you can find it over at Apture.com.

Okay, so WordPress may have random options like threaded comments, widgets out the wazoo, and templates you can customize ten ways to Sunday.  Some people may see these as good.  I see them as time sucks.

Simply put, I spend too much time on my blog as it is.  I know that if I switched to WordPress, I’d spend all of my time customizing and tinkering around with random gadgets and gizmos, rather than getting anything done around the house.  The laundry would never be done, we’d order pizza most nights for dinner, and the house would be a mess.  And, trust me, none of that ever happens now with Blogger.

So, thank you, Blogger, for saving me hours of time. I love you.  I really do.