For the most part, my own regrets are small, relatively insignificant ones.  I regret trying to change out that clogged sprinkler head myself.  I regret having that last drink.  As much as I love Taco Bell, every time I go there I later regret that decision.  And so does my family.

And then, there are the big regrets.  Perhaps, one of the biggest of my life is that I never said goodbye to my grandfather.

Grandpa got sick the summer before my senior year in college.  I knew he hadn’t been doing well, but at the time, I was too self-absorbed in parties, a new relationship with some hot guy that would eventually become my husband, and my summer job to realize the gravity of the situation.  As a young, invincible 21 year-old, mortality wasn’t something that was at the forefront of my mind.

He passed away later that summer.  I never got to say goodbye.

Almost 15 years later, that regret has not diminished.

A few months ago, I got an email that my grandmother was not doing well.  I had a flash of deja vu.  And this time, I did not hesitate.  I knew I had to go.

As bad as this sounds, as much as part of me wanted and needed to go, the other part equally dreaded it.  In the back of my mind, I knew it would not be a “fun” vacation.

For one thing, I planned on taking Chip, so that he could meet his great-grandmother.  But the thought of traveling solo cross-country with a toddler in tow sent shivers up my spine.  And for good reason.  Multiple meltdowns at 50K feet, hectic schedules and long days driving back and forth from the hotel ended up taking the toll on us both.

I was also not prepared for the mixture of bittersweet emotions I’d feel once we got there.  The sadness of seeing my once-solid grandma transformed into someone more childlike than grandmotherly.  The frustration of strained family relationships.  The emptiness of walking around in a house that used to be filled with laughter, chaos and vivacity…that was simply not any more.

I say it was bittersweet, because there were indeed good things about the trip as well.

Like seeing Chip trounce around in the fields I used to spend my summers frolicking in. 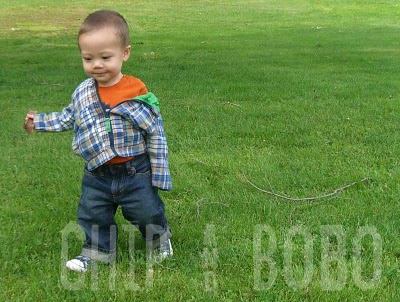 Glimpses of the grandmother I remembered.

Quiet strolls in the field with grandma. 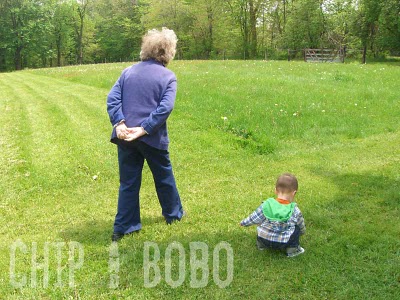 And one day, visiting with my grandmother, and seeing the recognition in her eye when she realized who I was, and that it was her great-grandson visiting.

Do I have any regrets for going?  Not a single one.

I suck at snappy comebacks.

When I find myself in a conversation that gets my panties in a bunch, I get so emotionally caught up in the moment, my tongue gets tied.  I freeze.  I walk away feeling like there are so many words left unsaid.  Then I stew, fret and obsess.

And finally, hours or days later, I come up with the perfect comeback.  I find the words that are witty, insightful and poignant (to me, at least).  And, of course, by that time, it’s too late.  The only one who even remembers what initially prompted the comeback is me.

Verbal comebacks are not my thing.

But apparently, I’m good at the other type of snappy comeback.

You know, the kind when you vow to quit something (like, say, blogging), decide after a whopping four days in that you really can’t stay away, and then reappear on the scene like a teenage drama queen.  That kind of comeback.

Last week, I wrote about taking time off from blogging.  About feeling overwhelmed by too many pots on the stove.  About needing a break and simplifying.  I decided to put writing temporarily on hold.

I was thinking about taking anywhere from 3-6 weeks off.  I did.  Turns out, those weeks were just measured in dog years.

In retrospect, the whole withdrawal thing probably would have gone over a lot better if I would have removed Google Reader as my homepage.  Do you know any recovering shopaholics that spend their day hanging out at the mall?  I do.  They’re the well dressed ones who found all the best deals.

The truth is, after about 48 hours, I started to miss it.  Maybe it’s the forbidden apple syndrome, but seeing the blog and not being able to use it suddenly made me really how much I like having it in my life.  And, in my own little melodramatic way, I think I’ve grown to actually need it.

What else has changed in seven days?  Lots.  And nothing.

I haven’t been on Blog Frog or Twitter for a whole week.  I think I’ve been on Facebook two times since then, which is a record for me.  I’ve suddenly found some missing hours from every day I forgot I had.

I’m also learning to accept the fact that I will never, in this lifetime, see the bottom of my Google Reader box.  I actually deleted everything in it, and started from scratch.  It was a little sad, seeing all of those not-yet-discovered little gems disappear.  But it also felt cleansing.

I can’t read the entire internet every night.  And I can’t reply to all comments or visit every commenter’s blog like I want to.  I have to be okay with that.

This past week, I’ve come to realize just how much time I spent in the evenings (after the kids had gone down for bed) commenting, writing, networking, or just dinking around aimlessly on the internet.  I would sit down for a few minutes, and it would turn into hours without me realizing it.  I’ve been able to physically turn off the computer, back slowly away, and go spend some time doing something meaningful with my better half.

This week, our meaningful activity has been to have Jay whomp me at Frogger on the Playstation.  I’ve discovered I like getting whomped.  Actually, that’s a lie.  I hate losing.  But I’d rather be trounced by Jay than anyone else.

And so, I’m tentatively venturing back in to something I really like.  I’m going to take it one day at a time, and try not to lose sight of why I’m doing this.  I’m going to attempt not to change things I have no control over.  I’m going to try to not stew, or fret or obsess.

Maybe, by doing that, I’ll find the right words.  Maybe, this snappy comeback will be a meaningful one.

Growing up, I never won any popularity contests.  Actually, I think it’s fair to say I was not even smelling contestant status.

To say I was a late bloomer would be a gross understatement.  I was awkward, gangly, and a true geek (actually, that last part still holds true).  I think this picture of me from junior high tells you all you need to know: 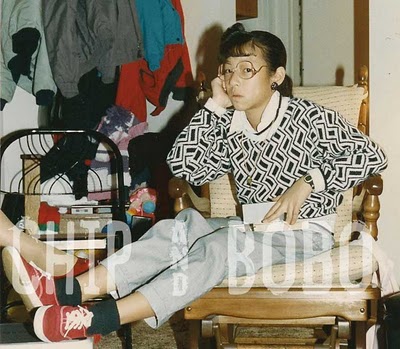 ‘Nuff said.  (To be fair, my formative years fell smack dab in the 80’s, and that sweater really was in style then.  At least that’s what I tell myself.)

The funny thing is, when I look back onto my awkward teen years, I don’t think my inability to win the coolness contest bothered me much at the time.  I’m pretty sure I was so obsessed with my own little nerd posse (and making sure those bangs were perfectly coiffed and shellacked with at least a half can of Aqua Spray), that the fact I was not cool went right over my head and extremely stiff hairdo.

Sure, I would have been tickled to have been voted prom queen.  But let’s face it… that was never going to happen.  I was not popular.  And oddly, I was both accepting of and okay with that fact.

Fast forward a few decades.  Braces are long gone.  Glasses have been replaced by Lasik.  God-awful sweater has been appropriately sent back to live under the rock from which it came.  Starched curly bangs… well honestly, who has time for any type of hair care routine when they become a mom?

And despite the external changes, the reality is that most days I’m still not winning any popularity contests, especially in my kids’ eyes.

Sure, there are some days when they treat me like I am the prom queen.  These are the times when Bobo tells me I’m the best mom in the world, and I believe it.  Or when my she says, “Momma, I love you to the stars and back,” and my heart just melts.

Those are the days when I languish in my popularity.

And then there are the other days.

Bobo was mad at me the other morning.  I wouldn’t let her wear sandals to preschool, even though it’s 50 degrees out.  She was pissed, and she let me know about it.  I let her stew and whine about it for a while, then finally went over to talk to her about it.  When she had finally calmed down, I gave her a hug and said, “You know I love you to the moon and back, right?”

She glared back at me.  Begrudgingly, she finally said, “Momma, I love you, too.  But right now I only love you to the stars, and not back.”

Considering the nearest star other than the sun is 4.2 light years away, I’ll take it.  Not exactly prom queen status, but I’ll take it.

Suffice to say, the popularity struggle continues.  More often than not, I find there are many, many days when I’m certainly not my kids’ favorite person.  I’m learning that parenting is certainly not a popularity contest.

And oddly, I am also learning to be both accepting of and okay with that fact.

Side note: Shamelessly, I do participate in other types of popularity contests nowadays.  If you feel obliged, please click here to indulge me.