1. Going on vacation.  The long, kid-less type.  And then coming home again. 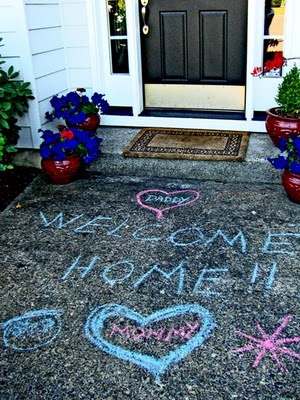 2. Savoring the feeling of cold ice cream sliding down your gullet. 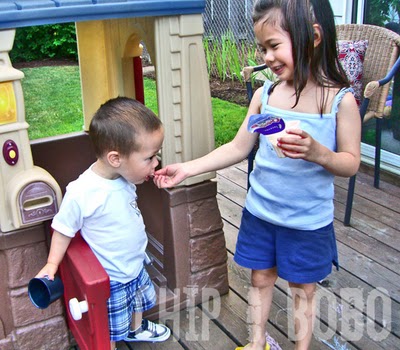 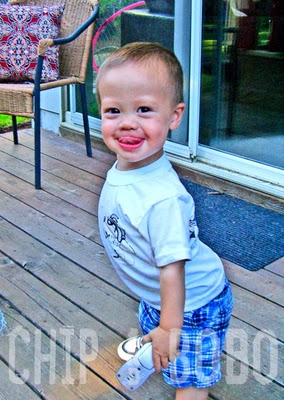 3. Getting outdoors, and trying to find creative ways to tire out two rambunctious kids.  This particular day, it was by holding the race of the century in the back yard.  For the record, dad won, and wanted to stop.  The munchkins wanted to keep going.  Who’s tiring who out, here? 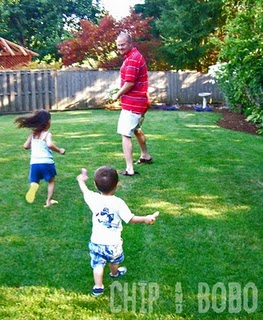 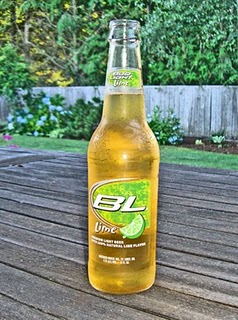 5. Having bloggy friends who go on vacation and let me invade their house blog.  Today I’m guest posting at my bloggy friend Diane’s place, at The Perfectly Imperfect Life, where I get to talk about “Five Ways to Channel Your Inner Martha Stewart.”  If you’re in the mood for more lists, please swing by and check it out.   It’s a good thing.

Jay and I are headed off for a few days away, sans kids, to celebrate 11 years of him putting up with me (In the legally binding sort of way, at least.  Altogether, he’s actually put up with me far longer than that.)

Las Vegas is, without a doubt, one of my favorite places… ever.  Before we had kids, we used to jet off to Vegas 3 or 4 times a year.  While that habit has obviously gone by the wayside since the munchkins came along, every year, we still manage to make an annual pilgrimage (usually coinciding with our anniversary) to Sin City.

Speaking of which… I’ve often wondered where the term “Sin City” came from.  I could probably Google it, but I’m just too lazy.  Personally, I’m thinking it has something to do with the seven deadly sins.  ‘Cause Vegas pretty much covers them all.

Here’s my take on why I think they call it “Sin City”:

I know it’s not good for you, but I love getting a tan.  There’s also something to be said about returning from vacation bronzed and glowing, and making my co-workers jealous.

Unfortunately, I tend to forget about the fact that I live in Oregon and, even with my naturally darker complexion, my poor skin hasn’t seen the light of day for months.  That and the fact that it doesn’t take long to fry while sunbathing in 110 degree weather.

And so, my efforts to get a good tan in Vegas often produce something like this:

Vegas always reminds me of our carefree pre-child days.  It also makes me a tad bit envious of the time in our lives when sleeping in until noon, flying off to Vegas on a whim, or staying out late without regard for a babysitter was the norm.

Of course, after about 24 hours, I usually start to really miss the kids and we begin talking about them non-stop.  And then, I start to envy all of the families I see walking around on the strip.

Five words for you:  All-you-can-eat-buffet.

Also?  You are the devil, shrimp cocktail.  The devil.  And that’s all I have to say about that.

You know that saying, “What happens in Vegas, stays in Vegas”?  Well, it is simply not true.  I know, because I have two kids to disprove that little slogan.

Our anniversary is in July.  Both of my kids’ due dates were in March.  You do the math.

Slot machines are my nemesis.  They beckon to me, with their flashy lights, catchy jingles and allure of winning a few nickles.

Damn you, one-armed-bandits.   And that’s all I have to say about that.

Avarice, aka Greed or Covetousness

I’m not greedy.  As much as I love the slot machines, I’m not expecting or looking to win big when I play them.  Granted, winning a million bucks in one pull would be absolutely gravy, but I’m not kidding myself.

If I get my money back, I feel like I’ve won.  In actuality, this rarely happens.

And still, I can’t help by feel a little covetousness when I see someone winning a big jackpot.  Especially when it’s at a machine I just got up from.

Sleeping in until 8 (yes, for us, that is sleeping in).  Drinking margaritas by the pool.  Eating quiet, leisurely dinners without having to cut up someone else’s food.

Sounds pretty sloth-like to me.  And heavenly. 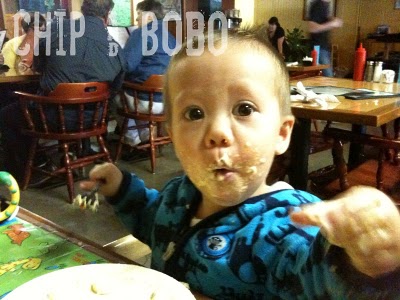 My definition of a good restaurant has sure changed since I had kids.  Except for the beer part, that is.

Chip and I had a date night out the other day while Jay and Bobo went to see Shrek.  Chip enjoyed making a macaroni mask and, amazingly, even managed to get some in his mouth.  We’re still working on the fork thing, but it’s coming along. 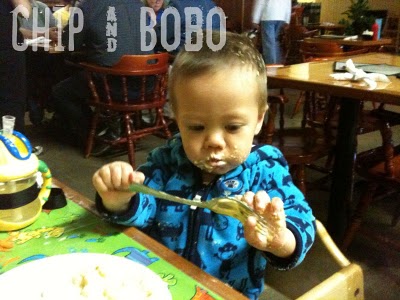 I took these pictures at Fanno Creek Brew Pub, one of the places we frequent as a family.  They have all three of my above criteria for a good restaurant, so we go there pretty often.  I also designed their new logo, so I get free beer … at least until my gift certificate gets depleted. 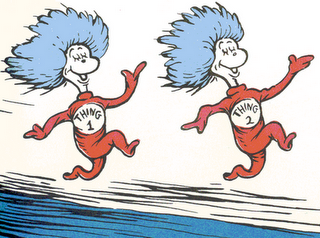 I am on round five of a rousing game of sleep tag this evening, and I am seriously tuckered out.  I only wish my kids felt the same way.

Here’s how it’s played itself out in our house tonight.

6:45. Thing 1, resisting jammie time, runs screaming and naked down the hall past Thing 2’s room.  Thing 2 awakens, and is not happy at all.

7:05.  Thing 1, jammies now on, is camped out on our bed watching Yo Gabba Gabba.  Thing 2 is still howling in his crib.  I go in to try to calm him down.  As I stroke his forehead, he starts drifting off to sleep.  Classically, at that very moment, Thing 1 roars down the hall and declares she has to go potty.  Thing 2 wakes up again, and baby screaming resumes.

7:20.  Thing 1 goes down for bed.  Thing 2 still hasn’t calmed down again, so I go back into his room and repeat the whole process again.  He’s so overtired by this point, and he take about 30 minutes to calm down.

7:50.  Thing 2 finally drifts off to sleep again.  Just as I’m closing the door to his room, Thing 1 flings open her bedroom door, sobbing hysterically, because she just had a “nightmare.”  Baby screaming resumes, again.  I’m not making this stuff up… it was literally like clockwork.  Her timing could not have been more perfect.

At this point,  I just lose my marbles.  I rant, I read her the riot act, and ashamedly so, I even curse at her.  Sometimes, I wonder who the real four year-old is in our house.  Needless to say, losing my cool did not help the situation any.  Thing 1’s crying has escalated, and now both kids are screaming.

I decide another temper tantrum on my part will do no one any good, and I close the door to Thing 1’s room and go downstairs to try to pull my act together.  While I’m down there, I grab a much-needed beer.

8:12.  The screaming has faded to sporadic whimpering.  I’m thinking (there I go again), that I might be in the clear now.  When their rooms are finally silent, I keep my fingers crossed I don’t hear from either of the Things until morning.

Over my second beer, I stumble upon this random fact:  Dr. Seuss (who this post is obviously inspired by), wrote over 60 children’s books, but never had kids of his own.  Tonight, I’m kind of mulling over the genius of Dr. Seuss, and wondering… did he know something I didn’t?

I discovered a new kind of decadence today.  They have this new lime-flavored Bud Light, and I have to say, I am hooked.  Seriously, it’s the best thing since… well, regular Bud Light.

Living in Portland, the home of the microbrew, I often get strange looks when I go to a pub and order my regular.  I usually skip over the 12 different kinds of locally fermented brews they have on tap and go right to the domestic beer section.  What can I say… I’m a simple girl.

Drinking beer was one of those guilty pleasures I really missed while pregnant.  For me, there’s nothing better than cracking a cold one open after a long day of work and snuggling into bed with a chick flick and some knitting.

Tonight, I had just settled under my comforter, Bud Light Lime in hand, when I hear Chippy’s little wails in the other room.  I had just fed him a little while before, so I knew he wasn’t hungry, but I trotted down the hall anyway to his nursery.

I picked Chip up and started rocking and bouncing him.  The bouncing must have knocked out some gas that was lodged in there; he let out a tremendous belch, and his cries immediately subsided to little whimpers.  “Well, that was easy,” I thought to myself, as I continued to rock him.  I leaned down to give my sweet one a little kiss on the nose, which was when I heard the gurgling.

I have heard of projectile vomiting before, but I had never, thankfully, experienced it firsthand.  They definitely call it “projectile” for a reason; this was not your average urpage.  Unfortunately, my first experience with projectile vomiting was at close range and, even more unfortunately, when my mouth was open.  Fortunately, very little actually got on the baby, which was amazing considering mom’s face was dripping with half-digested breast milk.  All I can say is “Eeew.”

Gagging, I scrambled for the nearest burp cloth to try to sop up my son’s blow.  Meanwhile, Chippy gave a little sigh and snuggled contentedly into my arms, obviously feeling much better.

As he drifted off to sleep in my arms, I thought about my friend Bud waiting for me in the other room.  It sounded pretty good right about now.  Right after I get some mouthwash, that is.