March Madness has officially hit our household, and with it comes the 24-7 onslaught of SportsCenter, bracket updates and game recaps.  I have actually been more into the tournament this year, despite the fact that I know nothing about college hoops.

J invited me to join his office pool.  He knows I pick my teams based on colors, mascots and occasionally a little eenie-meenie-miney-mo, a methodology which I’m sure, in his mind, has the words “easy money” written all over it.  Little could he (or anyone) predict the barrage of upsets that occurred in this year’s tournament which, I say with a little smugness, worked out quite well in my favor for the first few rounds.  (Side note: My smugness has since faded, as I am now tied for 38 out of 42 participants.  I did get to gloat over my husband for one glorious week but, sadly, it was short-lived).

On the kid front, March Madness has taken on a slightly different meaning.  Chippy officially started walking this past week.

He’s actually been taking a few steps here and there for the past few weeks, but this week, it’s as if he’s a little man on a mission.  I have to say, the drunken zombie gait that he’s got going on is pretty cute.  And the expression of pride and glee as he totters across the kitchen floor is nothing short of priceless.  There have been some major adjustments, though, as we’ve had to keep an eagle eye on his movements.  The diaper pail, stairs, toilet and bathtub have taken on a whole new interest when viewed from a different perspective.

It’s funny how, with Bobo, we couldn’t wait for her to begin walking.  We cheered and oohed over every small step, and encouraged her with every chance we could get to try to walk into our arms.

With Chip, I have approached the walking thing with a bit more trepidation.  While I obviously haven’t discouraged him from walking, I certainly haven’t been as vigorous in my encouragement.  I figured the little guy would walk when he was ready, and if that was later rather than sooner, I wouldn’t complain.

We knew when we had our second child that the double-teaming, 2 parent guarding 1 kid freedom we had enjoyed would likely come to an abrupt halt.  Up until this point, we have actually been able to skate this better than I thought.  Chip has always been active, but containable, and he and Bobo would happily play with their toys while one of us kept an eye on them.   Now that he is walking, though, my little zombie boy will wander off to all corners of the house with amazing speed.

As of this week, we are officially, unequivocally, now playing a man-on-man defense.

And so, a new adventure has begun.  One small step from Chip; one giant leap towards the babyproofing supplies from mom and dad.

It definitely makes me glad we’ve decided to stick with just the two kiddos.  Man-on-man we can do; I’m pretty sure I’m not cut out for a zone defense configuration. 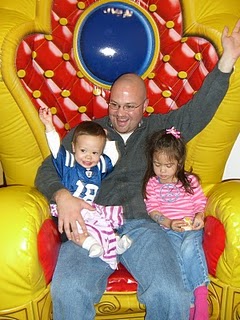 What do you get when you combine 12 preschoolers, a bouncy house, and a pile o’ birthday cake?

Pure and total chaos, a lot of fun, and miraculously, only one small boo-boo that did not require a band-aid or stitches.

To preface this, the first word that came out of Chip’s (and Bobo’s, for that matter) mouth was “Da.”  It remains his favorite word to this day, and he will happily squeal “da da da” every time he sees J walk in the door.  Lately, his vocabulary seems to be expanding almost daily, and he has added ball, uh-oh, Boo, caca (cracker), na-na (night night), he-go (here you go) and even “sissy” to his repertoire.

Until today, however,  “mama” had not been one of those words, much to my dismay.

Today, I was sitting at my desk working when I got an unexpected call from Chip’s daycare.  My little one had been enjoying his afternoon snack, which ended up coming back up reincarnate all over the daycare floor.  There had been a bug going around at daycare, so I drove down to pick up the kids early.

When I arrived, Chip was in quarantine in his crib, but was perched over the side, happily entertaining the other toddlers in the room with his babbling.  He seemed perfectly fine at the time.  I picked up Bobo in the other room, and we were on our way.

On the way home, Bobo jabbered on happily about her day at school, while Chip appeared to be dozing off in his carseat.  I glanced in the rearview mirror to see if he had fallen asleep, just in time to see Chip open his little eyes and spew an inordinate amount of vomit all over himself, his carseat, and the back of my chair.  And it kept coming… and coming.  It was like the Energizer Bunny, vomit style.

We finally pulled into the garage at home, and I got Flannie set up with some cartoons to keep her occupied while I took care of the barf boy.  I don’t care what anyone says; TV can be an excellent babysitter.

Chip, chunks of mystery food and drool dripping from his chin, was waiting patiently for me in the car.  The poor little guy looked wiped out and completely exhausted.

As I picked him up and hugged him tight, he wrapped his soggy little arms around my neck and unmistakeably, undeniably said “Mama, mama” several times before putting his head on my shoulder.  My heart completely melted.

It’s funny how some of parenthood’s best experiences can come at the most unlikely times.  I held my little guy and savored the moment.  It just doesn’t get any better than this.

Well, okay, if you take away about the bits of food stuck to my shirt, the sleepless night ahead of me, and the pool of ick I’d later have to clean up in the car, then that would be somewhat better.

But still, it was a pretty sweet moment.

Chippy smiled for the first time today.  I am 95% sure it was a true smile (at me!), and not just gas.  Although, as my cousin pointed out, maybe it was gas, and he’s already laughing at potty jokes.  If so, this kid already blends right in to this family.

I really don’t care one way or another; either my kid already has a great sense of humor, or we’ll be seeing a lot more of those toothless little grins that melt my heart.  No matter how I look at it, I see it as a win-win situation.