Forget the firetrucks.  The Spiderman toys.  The Pillow Pets.

Chip’s favorite present this year?  Was the smiley face pancake griddle that was meant for me. 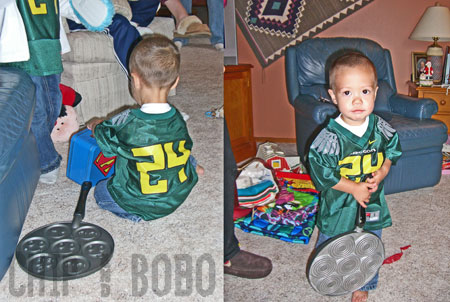 It’s pretty funny to see a toddler ditch the toys in lieu of lugging around an 8-pound cast iron skillet all day.  But lug he did.

And lick he did. 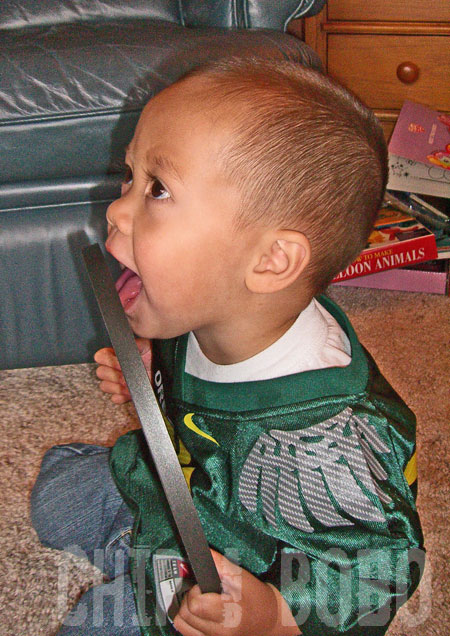 I’m not sure where his obsession with frying pans came from.  But if it means he might cook me breakfast in bed, I’m all for it.

Some other random Christmas stats and figures:

Probability we’ll do it all again next year: 99%

Because that’s the way we roll.  Laughter, family, a boatload of food, and a healthy dose of chaos.  It doesn’t get much better than that in my book.  And really, I wouldn’t change a thing.

Well, maybe one thing.  I’m thinking that next year, I think I’m going to skip the toys altogether and buy my son a sauté pan instead. 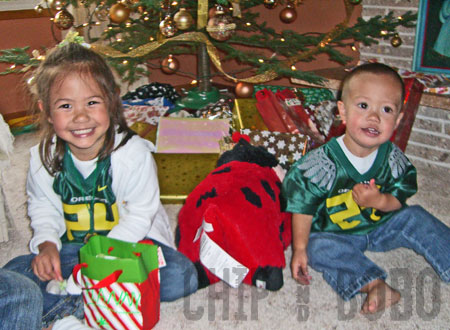 … and all through the house
The only creature who was stirring
Was Momma.  Scrambling to get her Christmas cards done.

I’m such a procrastinator.

As always, I had the best of intentions to get our cards done and out at the first of the month.  Obviously, that did not happen.

Truth be told, the whole process would be a lot simpler if I bought the boxed, pre-made cards like I used to do before we had kids.  But, apparently, I was smarter back then.

Post kids?  I figure I have so much free time on my hands, we I can do stuff  like this:

Or this one.  Chip’s in this one, if you look closely.  This is my personal favorite, by the way:

Or this one.  My attempt at going for the more classic, “normal” Christmas card: 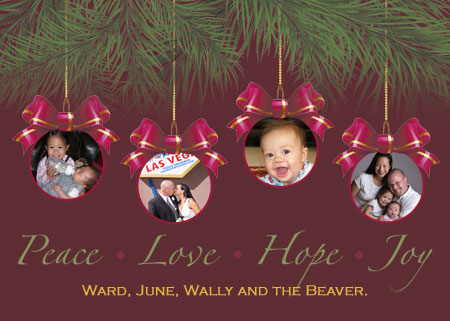 Tonight, I finally finished with this year’s cards.  Seeing as how there’s a snowball’s chance in hell they would actually arrive by Christmas, I did New Year’s greetings instead of holiday cards.  Here’s a sneak peek: 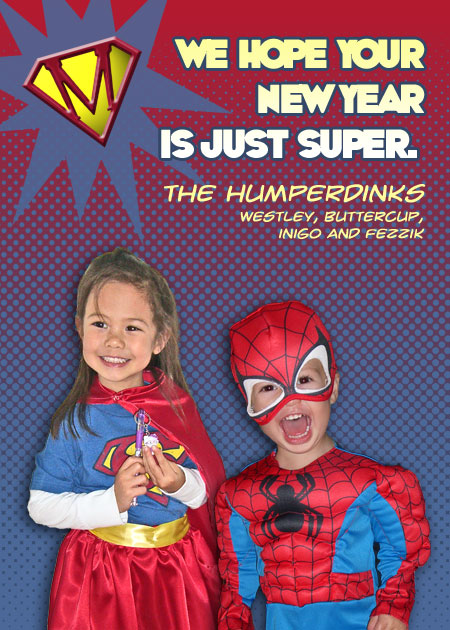 Sadly, I’m still not finished.  I still need to print those little suckers, stuff and address them, and then venture into the vortex of doom to the post office for stamps and mailing.

I figure at the rate I’m going, with any luck, the cards should arrive by Valentine’s Day.

But at least I’ll sleep easier tonight knowing they’re almost ready to go.  And, with that, I say: “Happy Holidays to all, and to all a good night!”

Don’t forget!  Just 2 more days to enter the Elf Off if you’re interested.  We’ve had some great entries so far.  Come join in the fun!

I love the internet.

Which is a good thing, because I spend entirely too much time on it. At work. While blogging. And while aimlessly surfing around cyberspace when I should, instead, be sleeping.

But the best thing about the internet? The fact that, with a few clicks of a mouse, you can make pictures like this: 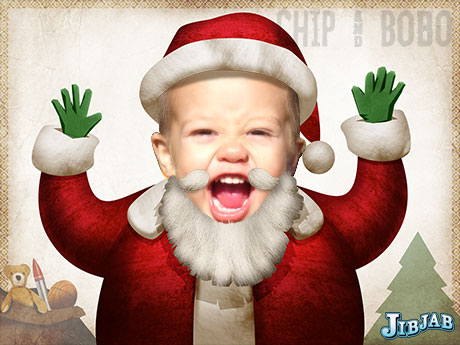 I’ve seen this 8 times today, and it still makes me laugh.

Seriously, folks. Stuff like this is too funny not to share. I think this is so cool, in fact, that I’m teaming up with my blog buddy, Sandra, to bring you some holiday linky goodyness.

We’re hosting an Elf Off, and we’d love for you to join in!

Just link up a blog post containing your own personalized e-card greeting. We used JibJab for ours (you can create your own free holiday-themed picture or video by clicking here or here) but there are lots of other sites where you can create similar e-cards.

Then, grab a button from below, link up, and check out some of the other holiday cheer. You can link up here, or over at Sandra’s place, Sawdust and Paper Scraps.

A few updates and questions answered:

Dexter who?
Dexter halls with boughs of holly.  (Can you tell I live with a preschooler?)

Yep.  We’re getting ramped up for Christmas around here.  And so far, it’s gone pretty smoothly.  With a few minor hiccups.  Such as:

Knock knock.
Who’s there?
Donna.
Donna who?
“Donna pull on the Christmas tree, Chip!”
Oops.  Timberrrr!  But Donna worry.  He’s okay.  After we unlodged the pine needles from his forehead, he’s perfectly fine.

Knock knock.
Who’s there?
Shirley.
Shirley who?
Shirley you remembered to check the Christmas lights before stringing them.  Didn’t you, momma? 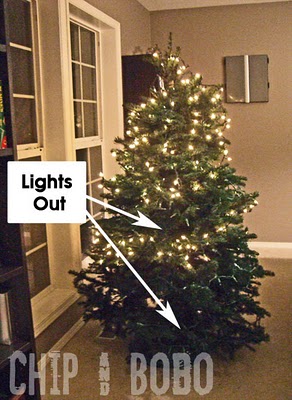 Knock knock.
Who’s there?
Anita.
Anita who?
After cleaning up our little lumberjack, and then wrestling with the lights for 2 hours, Anita beer.  Seriously.

Knock knock.
Who’s there?
Anna.
Anna who?
Anna body know what the problem is here? 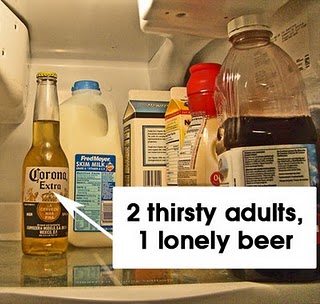 Knock knock.
Who’s there?
Ima.
Ima who?
Ima back from da store.  With this. 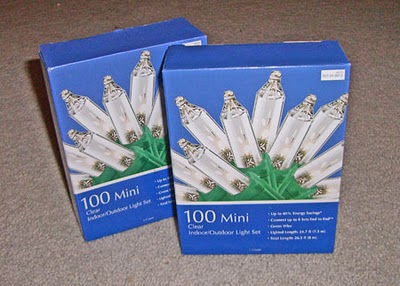 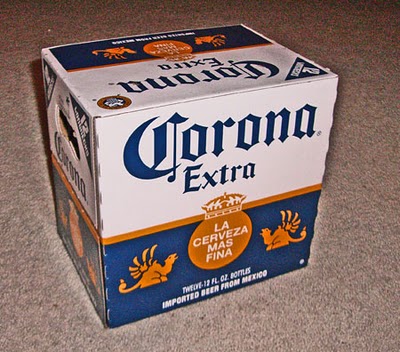 Knock knock.
Who’s there?
Ida.
Ida who?
Ida written a real post tonight but, honestly, getting the tree up and decorated just about tuckered me out.

But at least I have this to show for it.  Ain’t she pretty? 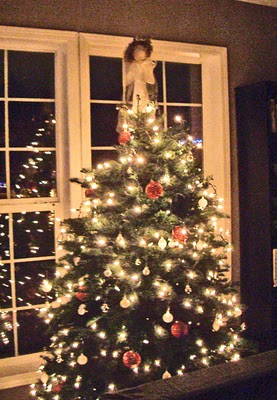 I gotta tell you, I love Christmas.  I really do.

And, despite my husband’s gentle hints each year that we should get one of those fake, pre-lit trees, I never give in.  I love getting a real tree.  I love the smell.  I love the twinkle of each little glittery ornament.  And, yes, I even love putting on the lights.

But one thing’s for certain.  Putting on the lights?  Is a whole lot more fun when the lights actually work when you plug them in.  And when you have a cold beer in hand. 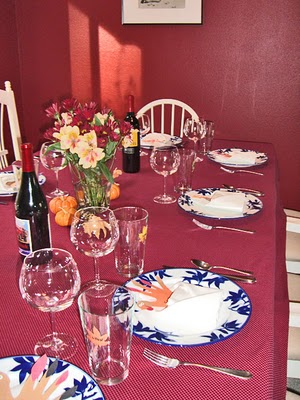 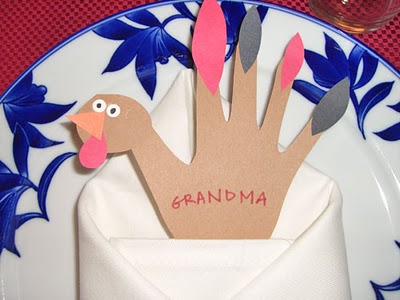