Bobo has stayed home sick from preschool the past few days.  Cooped inside on a rainy day with a sick toddler, I’ve been brainstorming ideas to keep both of us from going stir-crazy. 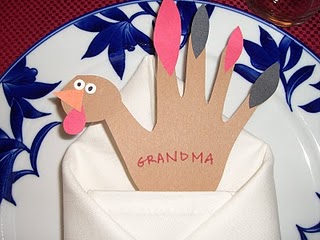 Today, I decided our project du jour would be to make paper handprint turkeys.  Bobo loves craft projects, especially anything involving glue, which she doesn’t get to use much at home.  We’re having my entire family over for Thanksgiving dinner in a few weeks, so I thought it would be fun to make turkey namecards for everyone’s plates.

I guess I should have experimented with the first one before I embarked on making 16 turkeys.  Bobo had a ball making the first turkey (hers), but then quickly got bored and moved on to something else.  So much for my mother-daughter bonding project.  I ended up making the other 15 turkeys myself, but I think they turned out pretty cute.

Now, if only I can figure out how to actually make a real turkey, I will be set.  1-800-DOMINOES will be on speed dial just in case.

Before I became a parent, I was blissfully unaware of the meaning words such as “Jibbitz.”  After I had kids, and Bobo started dressing herself, Crocs (and Jibbitz, which are incidentally the little decorative buttons that go in the holes of Crocs) became a familiar term in my parenting lexicon.

On one of J’s recent business trips, he brought back a pair of “Where the Wild Things Are” Jibbitz for Bobo’s new Crocs.  Bobo was delighted by her new trinkets, and I had her grab her shoes from the front door so I could pop them in.

Easier said than done.  My 10 minute struggle to get Max to go into the hole did not make me a fan of the Jibbitz.  Maybe it is just me, but I think Mr. Jibbitz and Mr. Croc clearly need to work on their communication skills.   Either make the button smaller, or the hole bigger, people!

Ironically, once both of the Wild Things were securely in place, Bobo examined my handiwork, and decided she wanted Max to go on the left foot instead.  I had to laugh.  “Tough beans, kiddo,” I said.  “Max is staying in that Croc for all of eternity.” 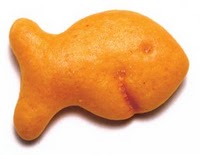 I thought it was sweet that Bobo serenaded me with “All the fishies are swimming in the water” while I was in the shower this morning.  I even joined in for a round or two.

It wasn’t until I got out of the shower that I glanced down and saw the goldfish crackers floating in the toilet.  Mr. Roto-Rooter should get a kick out of this one.

There’s a new chef in town.

Bobo’s new breakfast concoction: toasted bagel sandwich with peanut butter, bacon and cheese.  It is pretty cute to see her artfully arrange the bacon bits and cheese on the bagel.  Sometimes, for a finishing touch, she’ll add some dried blueberries as a garnish.

This reaffirms my belief that my kids will truly eat anything.  At least it’s well balanced, even if it does turn my stomach…

My husband doesn’t travel often for work, but when he does, I brace myself.  It is inevitable, and I mean like clockwork, that one or both of the kids gets sick when he leaves.

J left early this morning for five days on the road.  Not that this could be helped, but the timing of this trip really sucked.  I’ve been ramping up at work in preparation for officially going back “full-time” in September (ironic, as I’ve actually been working 40 hours most weeks for quite some time).  Our car is in the shop, so we had to go in to get a loaner car late last night.  Both kids just started daycare full time, and we let go of our nanny.  Let’s just say there’s been a bit of transitional chaos around the Mendenhall household lately.

And then there is the sick thing.  The first time J went out of town and Bobo got sick to her stomach, I thought, “That bites.  Perfect timing.”   The second time, I thought, “Oh noooo, not this again!”  After the third and fourth times, I bought a clue and surmised that maybe this was all more than mere coincidence.  I highly suspect much of the queasiness is psychologically induced, not that that gives me any ideas on how to combat it.

After J left this morning, I was relieved to see no signs of the telltale vomit that usually accompanies his absence.  Feeling safe, I packed the kids up to go to the mall.  We did our usual routine trucking around in the stroller, playing in the kiddie area, then topping it off with Happy Meals at McDonald’s.  All in all, a fun day.

It wasn’t until the car ride home that Bobo said she didn’t feel so good.  I can say firsthand that watching your child throw up in the rearview mirror as you drive along the freeway, unable to stop, is not a fun experience.  Fortunately, but the time we got home, the yacking had ceased, and both kids were exhausted and went down for their naps.

While they were sleeping, I attempted to clean up the McBlow from the inside of the car, and marveled at Bobo’s trajectory.  Somehow, she managed to spew all over not only herself, but also two carseats, one Baby Bjorn, one stuffed monkey, one binkie, the inside of one loaner car, and a partridge in a pear tree.  How Chip himself managed to stay out of the line of fire is beyond amazing.

J calls me on his layover just as I’ve come inside after getting the car cleaned up.  He gives me a little pep talk, and I hang up feeling slightly better.  Whenever he goes out of town, I gain a new found respect and admiration for single parents (how they do this on a daily basis and still manage to keep their sanity, I have no idea).  It also makes me so appreciative of all that my husband does for both me and the kids while he is here.  In a word, my husband really rocks.  It’s going to a long five days without him… but we anxiously await his return!