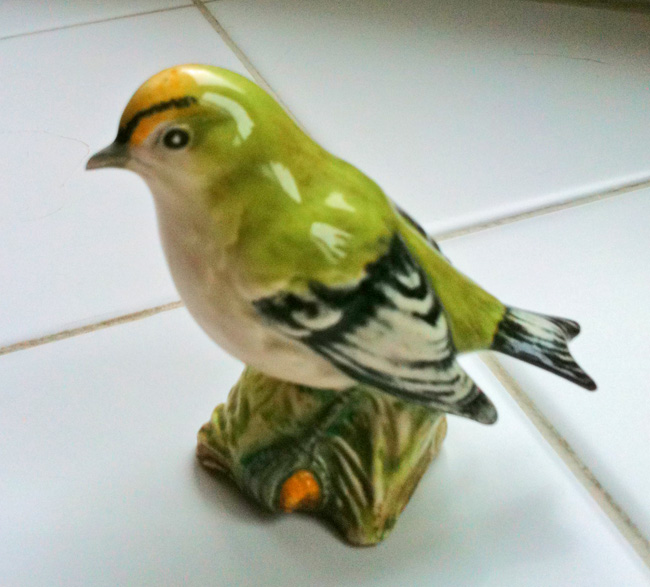 When we got married twelve years ago, we received some interesting wedding gifts.

A set of gaudy, crystal and gold frames that looked straight out of the Liberace museum.

And then there was the person that gave us the bird.

No, not figuratively.  Literally.

The Bird was a present from a relative who, for the sake of anonymity, we’ll just call Aunt Betty.  I admit, we had kind of a “WTH?” moment when we opened the tiny little package and discovered the painted ceramic creature.

Nevertheless, I firmly believed it was the thought that mattered.  So we wrote Aunt Betty a nice little note, thanking her for thinking of us.  And then we put The Bird on a bookshelf somewhere, where the little guy quickly made fast friends with the dust bunnies.

And there he remained.

Until one day, The Bird went AWOL.

I didn’t notice his absence at first.  It wasn’t until several weeks later, when I was watering the plants, that I stumbled upon our little friend.   He was tucked in the flower pot of a big palm in our living room, peeking out from behind the leaves.

“Did you put Aunt Betty’s bird in the flower pot?” I asked my husband later that night.

“Yeah.  That thing was just so ugly,” Jay answered back, nonchalantly.  “So I decided to hide the bird.  I thought we could take turns putting it somewhere in the house.”

Again, I encountered another “WTH??” moment.

I’ll never quite know what inspired my husband to hide The Bird in the first place.  But his quirky little idea caught on.  And soon, it evolved into a game.  We began trying to one-up each other, to see who could hide The Bird in the most bizarre location in the house.

It went on for months.  Until one day, The Bird was hidden in such an obscure place, it remained hidden.  And he was forgotten.

Recently, however… a few years and a couple of kidlets later, The Bird mysteriously resurfaced.

And the rousing game of “Hide the Bird” has once again resumed in our house.  Only this time, there are four of us playing.

Can you find the bird?

Ironically, I figure that The Bird has actually gotten more use than any other wedding present we received.  Maybe my aunt knew something we didn’t.

So, thank you, Aunt Betty.  Yours is truly the gift that’s kept on giving.