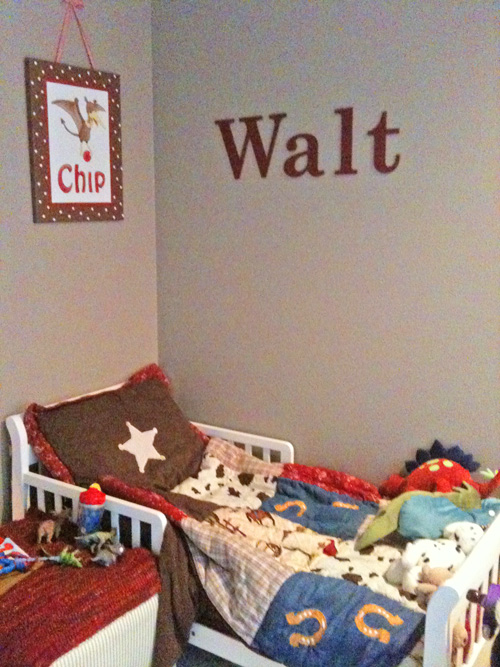 And every time I peek through the doorway, I’m surprised that it’s not there.

It had been through a lot.  It had been urped-on, peed-on, and projectile-vomited-on.  It had been the launching pad for countless binkies, stuffed animals and sippy cups that were chucked out, trajectory style, by the little occupant within.  The thing had been plastered with stickers.  Heck, it had been used to cut teeth on.

But I hung onto it.  Because it was one of the last great markers of babyhood.

It reminded me of late night feedings.  Of stumbling into his room, my eyes halfway shut, to snuggle with a warm, hungry little infant.

It reminded me of a time, before he even arrived, that I lovingly decorated his nursery with little stars and cowboys.  When we redid his room, he decided he didn’t want no stinkin’ cowboys anymore.  “Big Boys like dinosaurs,” I was told.

It reminded me of walking into his room in the mornings, and seeing him beam and stand up, arms outstretched to greet me.

It reminded me of a time when I knew he was safe, secure and, most importantly, contained in one place in the house.  Now, he gets out of bed at will, roaming the house and stirring up mischief at ungodly hours.

When we packed it up, it reminded me that it was the last time it would ever be used.  At least by our family.

It reminded me that I could still pretend that he was my little guy.  A baby.  Now he’s a Big Boy, because he sleeps in a Big Boy Bed.

He was ready.  Even though I was not.