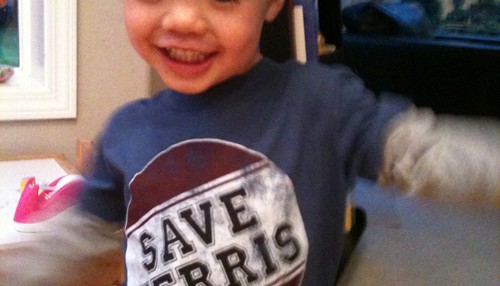 (For the record, we picked up the shirt, not the kid, from Target.)

My son wore this little gem proudly to preschool the other day.  The shirt did cause a bit of an awkward moment when I picked Chip up later in the day, though.  When his teacher asked me, “Who’s Ferris?” I realized the movie was probably a little before her time.  The whole experience made me feel, well, a little old.

If you don’t know the story of what happened to Ferris Bueller, I’ll give you the rundown.  My best friend’s sister’s boyfriend’s brother’s girlfriend heard from this guy who knows this kid who’s going with the girl who saw Ferris pass out at 31 Flavors last night.

If you want to donate, a group of us are collecting money to buy Ferris Bueller a new kidney. They run about 50 G’s, so if you wouldn’t mind helping out…

Or, you can just go pick up a shirt at your local Target to show support for the cause.  The shirts are pretty choice, if you ask me.  If you have the means (or an extra $8), I highly recommend picking one up.