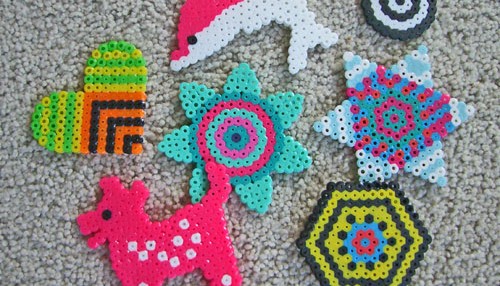 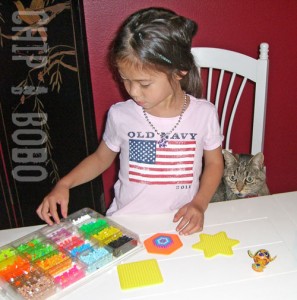 If your child has not yet discovered Fuse Beads, you’re in for a treat.  These colorful little plastic beads are a great way to keep your child busy on a rainy day.  And believe me, we have plenty of those around here.  Bobo is literally obsessed with the things right now.

But, as I’ve discovered, there is a downside to our newly-found craft project.  And, sometimes, there is a really, really big downside.

Before you venture into the world of Fuse Beads, be forewarned.  There is a good, a bad and an ugly to these little suckers.

The Good: Fuse beads will keep Child A quietly entertained for hours.  OK.  Maybe not hours.  But at least for a good 30 minutes while you attempt to make dinner.

The Bad: Once the fuse bead masterpiece has been completed, Child A will insist that her work of art be ironed.  Immediately.  Because the sky will fall if you don’t.   It makes no difference that you’re still in the middle of making dinner.  Fuse beads wait for no one.

The Good: You admit, as you iron the little piece, that fuse beads are an excellent way of encouraging counting, sorting and pattern-making with young children.  Your child may surprise you with their ability to create elaborate pieces of artwork.  And you might “ooh” and “aah” like it’s the best thing since sliced bread.  Because, of course, it is. 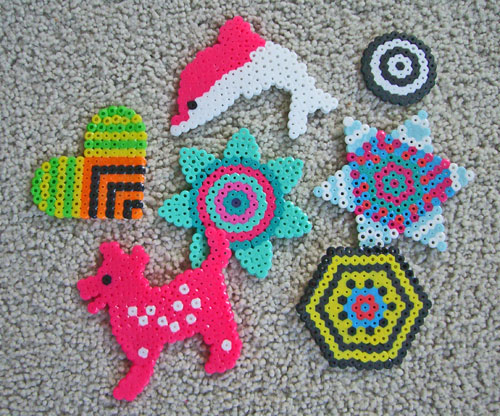 The Bad: Your “oohs” and “aahs” will pique the interest of Child B.  Whatever Child A does, Child B must also do.  And even though you try valiantly to work on patterns with him (“Can you do a blue and then a green?”), it’s far more fun for a two year-old to grab huge handfuls of the beads and mix the colors together.  Or try to sneak beads from his sister’s pile.

The Good: Both children are quietly occupied again (Child A making the beads, Child B attempting to steal beads from Child A).  You resume making dinner.

The Ugly: Child B starts coughing.  You rush over to where he is.

“I gotta boogey up there,” Child B says, rubbing his nose.

But on closer inspection you realize that he didn’t say “boogey,” but rather, “bead.”    Apparently, he tried to create his own fuse bead masterpiece.  Up his nose.

The Good: Child B, distracted by a Disney movie, allows you to pin him down on the ground while you go fuse bead hunting with a pair of tweezers.

The Bad: After retrieving the first fuse bead (a green one!), you discover Child B has actually stuck multiple beads up his nose.

The Good: When asked, “How many beads did you stick up here???” Child B responds back quickly and gleefully, “OneTwoFree!”  You figure that at least we’re working on counting skills while we’re fishing them out.

The Ugly: You discover, after fishing out the third fuse bead, that Child B cannot actually count after all.  Or, that perhaps he just lost count after the third.  So much for child geniuses.  As you proceed to extract the fuse beads out from the depths of his little nose, you wonder how a nose so little could hold so many beads.  It’s kind of like the clowns coming out of the tiny car at the circus… how DO they all fit in there?

The Good: You discover, as you’re counting the line of snot-covered beads pulled from your little one’s nose, that he actually inserted them in a very specific order up his nose.

Yellow…  No wait, that last one was a booger.

It was a pattern!  He was listening to what you said after all.  Despite your distress over having to perform surgical extraction on your son, a small part of you beams with pride.  What a smart cookie.

And you begin to reconsider that maybe he is a child genius after all.

A child genius who just so happens to like to stick small colorful objects, in copious amounts, up his nose.

6 thoughts on “Fuse beads: The good, the bad, and the ugly.”