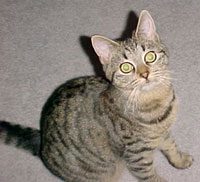 For me, one of the bonuses about being pregnant was getting to wrangle out of a household chore that I really despise: cleaning the catbox.

As everyone knows, pregnant women aren’t supposed to clean the litterbox.  And since I always followed the pregnancy letter of the law to a “T”, I made this tidbit known to my husband pretty much the moment we found out we were expecting.  “It’s just not safe for the baby,” I explained, while munching on a cold cut sandwich.

So he obliged.  And, to my delight, he continued cleaning it weekly, even after the babies were born.

I admit, I also didn’t offer to take it back.  I figure I cleaned up enough human poop to make up for it.   But that meant that for the past six years, I’ve been lucky enough to stay far, far away from the litter box.

Today is Booyah’s routine pet exam.  And apparently, since she’s getting up there in cat years, we get to take something extra to her annual exams.

Now, if you’re a dog owner, this might not seem like a big deal to you.  If you’re like all-but-one-of-my-neighbors, you’re probably used to scooping up the little gems in tidy little plastic bags and depositing the warm little presents in the garbage.

So here I am, typing away at the computer.  Waiting for Booyah to drop a deuce so that I can go hunting through the litter box for nuggets.  It’s like waiting for the grass to grow.  Only stinkier.

After which I get to wrestle my angry, scratching pet into a cat carrier that she loathes more than anything.  And then I’ll drive said cat, moaning and hissing to the vet and back.

It almost makes me wish I were pregnant again, so I could delegate that task to my wonderful husband.

But on the plus side, I figure my day can only go up from here.

13 thoughts on “Waiting for the deuce”