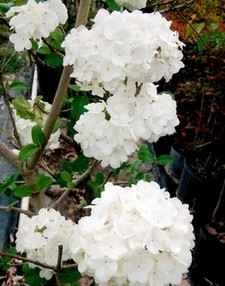 There is a snowball tree in our back yard.

For 11 months of the year, it looks like your average deciduous shrub.  And in the winter, it’s pretty dang ugly: just a contortion of barren, dead-looking sticks.

But  in late spring, it explodes in a mass of beautiful, white petals.  For the two weeks that it blooms, you can barely see the greenery hidden underneath the display of flowers.

It’s pretty stunning.  I look forward to those two weeks out of the year where we have a little visual break from the dreary Northwest springs.

Alas, the same snowball tree caught my son’s eye when we were outside playing in the yard last weekend.

I was working in the garden while the kids were doodling with sidewalk chalk on the back porch.  They were busy and content.   Or, so I thought.

Because in the brief time I had my back turned, Chip had grown bored with the sidewalk chalk.  So he wandered a few steps away, where my beautiful snowball tree taunted and beckoned to him.

“Noooo!”  I shrieked, as I bolted towards him.

But apparently, I run really slowly.  Either that, or my son picks at lightning speed (seriously, I should put the kid to work picking weeds).  By the time I had made it across the yard, countless handfuls of the blooms had been viciously plucked from the bush.  They lay strewn across the lawn like little dismembered snowmen.

I was mad.  As in, really, really fuming.  And I was also out of breath from sprinting across the yard.

As I stood there, my son looked up at me.  He deliberately yanked one more bloom from the bush, and held it up to me.

I don’t know why.  But immediately, my anger dissipated.  Maybe it was seeing how much hilarity he saw in such a simple thing.  Or maybe it was seeing the little white petals stick in his dark hair like snowflakes.  Or his little giggles of delight.

I changed my tactic.  I explained that we do not pull flowers off plants.  But that, sometimes, if momma or daddy were with us, it was okay to make it snow.

So we shook that plant like there was no tomorrow.  We wiggled the branches, and batted at the leaves wildly.   It resembled one of those famous pillow fight scenes.  Except, instead of feathers, we were caught in a blizzard of petals and leaves.

Clouds of pollen (which I’m pretty sure confirmed that my kids are not allergic to pollen).

By the time we were done, our lawn was pretty much covered in white.  And my beautiful snowball tree had been decimated.  At least from 3 feet down.

I guess I’ll have to wait until next June to see the snowball tree flower again.  But I learned something this year when it bloomed.

There are some things in life that are pretty to look at.

But there are some things in life that are beautiful when they’re properly played with.

Sometimes, you just need a two year-old to bring that to light.  And to make it snow in June.

9 thoughts on “Sometimes, it snows in June.”