This weekend, I decided to undertake Mission Impossible.  Otherwise known as, “Operation Get Rid of the Stuff We No Longer Need.”

I started with baby bottles, nursing accessories and bibs that were no longer needed.  I found countless pacifiers sprinkled throughout the house.  My son hasn’t used a paci since he was 9 months old but I just couldn’t bring myself to part ways with them until now.  I tackled Chip’s overflowing dresser, which still contained clothes for 0-6 months.  Then I moved on to the toys scattered throughout the house.

I cleaned.  I purged.  I filled huge, Goodwill-destined garbage balls full of clothes, toys and baby paraphernalia.  Some bags were earmarked for the trash; others for family members of friends.  Mission Impossible was off to a good start.

But when I got to my daughter’s room, I came to a screeching halt.  Because there, nestled in the back of her dresser drawers, I discovered the neatly folded pile of The Sweaters.

The Sweaters are all that remain of my brief foray into knitting a few years back.  And as I took each tiny garment out, I quickly forgot about the organizing and purging.

Instead, I ventured down memory lane.    And I realized each sweater, poncho and tiny little hat held special significance for me.

Like the first piece of clothing I ever made for one of my children.  My first knitting project, actually.  I still remember ripping out rows upon rows of laboriously knit stitches and redoing them until I got it right. 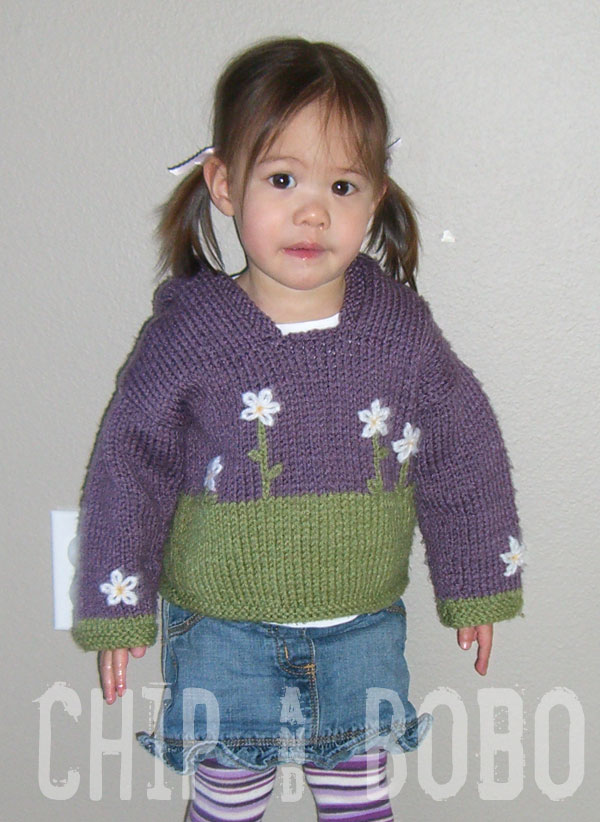 Or sweaters knit for special occasions.  Like Valentine’s Day: 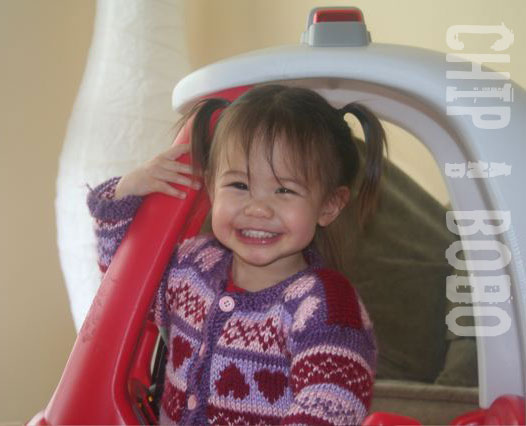 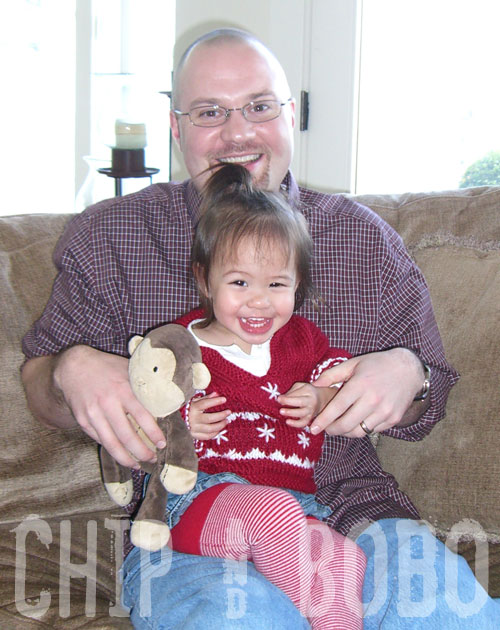 Or ones that were just used for doing yardwork:

And probably a dozen other creations that I forget to get pictures of when they still fit her.  Yeah.  When I got to the stack of The Sweaters, all of my good intentions to purge and get rid of things no longer used just flew out the window.

I don’t need them anymore.  She’s long since outgrown them.  But I just can’t bear to part ways with them.

They symbolize late nights curled up on the couch; the quiet only being interrupted by the clicking of two needles together.  Well, that and a few choice swear words thrown in here and there when a mistake was discovered.

They are mementos of a pigtailed little toddler who actually wore skirts.  And who still let me dress her.

Clearly, they are reminders of just how much time I had on my hands when I had just had one child.  (Hello!  I haven’t picked up a knitting needle since Chip was born.)

They are labors of my love.

So I created a new bag.  One especially reserved for The Sweaters.   It lies in the back of her closet.

For just the right person to give them to.  Or for a day when I get particularly un-sentimental and decide to finally send them to Goodwill.

Or maybe they’re waiting for the day when they’re finally worn again.  By a niece, perhaps?  Or maybe, if I’m lucky, by a granddaughter?  I can only hope.

For the time being, though, the bag sits in the back of my daughter’s closet.

It is special.  It contains sweaters.  And a lot of love.

22 thoughts on “Purls of love”