When I was little, I loved snow days.

I would squeal with delight when I would wake and see the ground covered with a blanket of fresh white snow.  We would rush to get our rickety Radio Flyer sled from the garage, and we’d take turns pushing each other down the steep driveway in front of our house.  We’d make snow angels until our little butts were cold and numb.  And then we’d tromp inside for steaming mugs of hot cocoa with melted mini marshmallows.

But, somewhere along the line, something changed.  All the magic and excitement I saw in snow days gave way to annoyance,  frustration and stress.

As an adult, I can’t stand snow days.

Because, now, when I think of snow, I think of things like school closures.  I envision being stuck in gridlock traffic with a bunch of Oregonian yahoos that don’t know how to drive in the snow or ice.  (And yes, I fully admit I’m one of those yahoos that doesn’t know how to drive in the stuff, either.)  I have fears of being trapped inside the house for days with two stir-crazy kidlets.  What if we run out of fruit or milk?  Or, worse yet, beer??

These are the reasons I don’t like snow.  So when I woke up this morning to fresh powder, I was already stressed out.

The traffic cams showed delays and accidents.  Almost all of the schools in the city were shut down.  The kids’ preschool was scheduled for a delayed opening.  And today was the day I was supposed to go into our office downtown.

The snowpocalypse had arrived.  All 2 inches of it.

My kids, however, did not see the urgency in the situation.

While I rushed around the house like a chicken with my head cut off, they peppered me with questions about making snowmen.  While I nagged them to eat their breakfast, they stared out the windows, looking longingly out at the snow.   While I watched the news for weather updates, they danced around the living room ecstatically yelling, “It’s snowing!  It’s snowing!”

I was about ready to blow a gasket.  I had meetings to go to today.  I had an hour drive into the office… with yahoos on the road!  On a normal day, I would have been in the office already by now.  Did they not understand that the snowpocalypse was here?

And then I realized.  They did not.  They saw only the beautiful white fluffy stuff on the ground, just begging to be frolicked in.

I looked at the clock.  I looked back into the eyes of my kids.  And I realized my son, just turned two, had only seen snow a handful of times.  He’d never played in it.

So we detoured.  I changed out of my business suit, pulled on my boots, and we went outside.

…where we made snowballs… 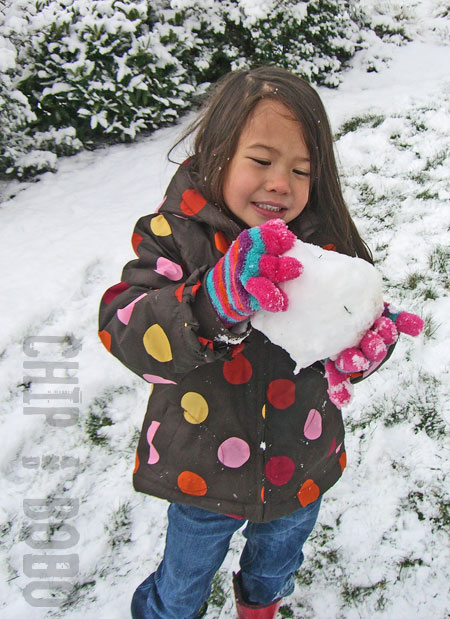 … and Chip got to play in the snow for the first time, ever… 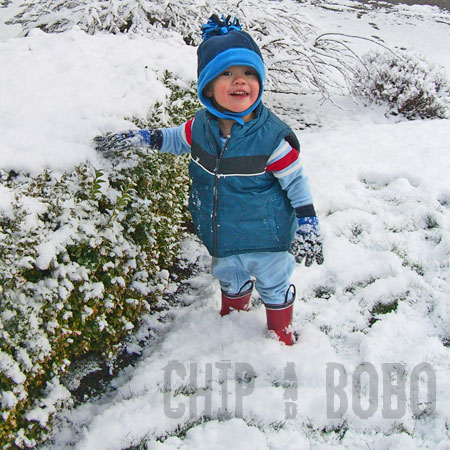 We attempted to make a giant snowman.  We realized that was too much work, and made a miniature, 2 foot snowbaby instead. 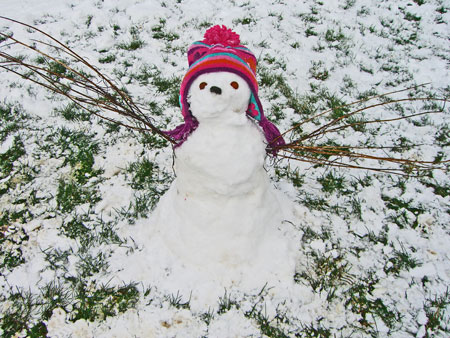 By the time we came back inside, changed into dry clothes, and got the kids dropped off at preschool, the snow was already melting.  But as I drove into work, I felt a little differently about the snow.  For the first time in a long time, I had seen it briefly as I did when I was little.

It had been beautiful.  New.  And exciting.  I had seen snow through my kids’ eyes.

When I finally arrived in the office, I was obscenely late.  But I had built a snowman.  And the earth didn’t end because of it.

And it’s a good thing we built it when we did.  Because when we got home this afternoon, everything had melted.  Everything, that is, except this: 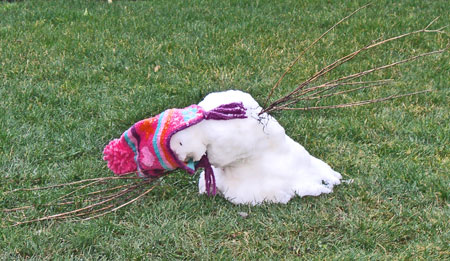 22 thoughts on “The Snowpocalypse That Never Was”