If I could sum up this past year in one word, that would be it.

And around here, it takes many different forms.

Like Belly Laughter.  I hear it when my daughter’s watching Pingu.  Which I think is the stupidest show ever but, apparently, is hilarious in a preschooler’s mind.  Or when I tickle Chip and he laughs so hard I think he might float up into the air, Mary Poppins style.  You can’t help but smile when you hear a child bursting into fits of belly laughter.

Or Wild Hyena Laughter, a sound that’s become more prevalent around here as of late.  It’s the kind of hysterical cackling that comes from two tiny caged animals trapped inside on a cold day.  Wild hyena laughter has a savage quality to it, and has a tendency to leave my ears ringing.  But, still, I’ll take it any day or whining or crying.

And then there’s Stifled Laughter.  As in “Oh my god, my husband just dutch ovened me, and I can’t help but laugh even though I’m trying to keep my mouth shut because it smells like something just died under here.” Yeah.  We get a lot of that in our house, too.  After 11 years of marriage, we still giggle about farts like we’re middle school boys.

And let’s not forget about Resigned Laughter.  It’s a mixture between a guffaw, a groan, and a muffled scream.  I used it the other day when I had just about hit my breaking point with the kids.  As I was about ready to explode, my daughter looked up at me and said seriously, “Momma, you look kind of scary when you make angry eyes.”  And suddenly, the tension was broken.  I had to laugh about that one.  Even if it was a resigned, wave-the-white-flag sort of laughter.

Or Silly Laughter.  Because one of the greatest gifts my children have given me is the ability to let my hair down and be crazy.  They’ve taught me that sometimes it’s okay to dance around the living room with underwear on your head.  (As long as they are clean.)  They’ve taught me that it’s okay to poke fun of yourself and not take life so seriously.  They’ve helped me release my inner child that I thought had long since disappeared.

I’ll admit it’s not always fun and games around our house.  We’ve had our ups, downs and utter failures this past year, just like any family.  There have been times when I wanted to throttle my children.  Or just throw in the towel and quit.

But the glue that holds us together… and that makes those crappy times seem far less significant… always seems to be laughter.

Above all, there has been laughter. 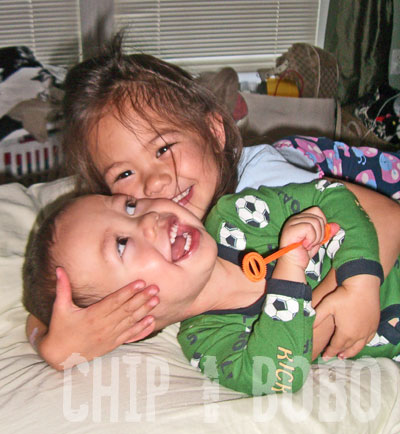 29 thoughts on “A laughing matter”