My ferocious tabby, Booyah, has a really annoying habit.  She’s like Lenny in Of Mice and Men… only the feline version. 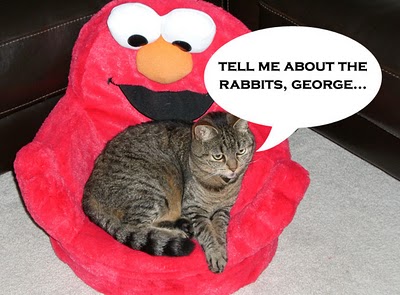 Okay, so she doesn’t really talk.

But much like Lenny, she likes to make friends with small creatures.  Insects, rodents, you name it… she tries to befriend it and play with it.  And, like Lenny, she does not know her own relative strength.  She’ll bat at it, try to cuddle with it and, more often than not, she will end up squashing the poor helpless creature into an untimely death.

In the case of spiders, this is a good thing indeed.  I hate spiders.  The mice and shrews she leaves on my door mat… not so good.

And, occasionally, she won’t entirely finish the job.  Such was the case a few weeks ago, when I found a maimed baby bird on our back lawn.

When I saw the poor little thing, I knew I had to do something.  It was obviously badly hurt, and could not fly.  But what should I do?

I turned to my vet for the answer.  She said that, in all likelihood, Tweety was a goner, and there was nothing I could really do.  The best thing to do, she said, was to put it out of its misery.

And here’s where my dilemma started.  Spiders excluded, I’d never killed an animal before.  And thus began the formulation of “Operation Put Tweety Down.”

I called Jay at work.  “Maybe he’ll come home on his lunch break and take care of it for me,” I thought.  Drat.  He was in a meeting and didn’t answer his phone.

I Googled:  “How to kill an animal.” Big mistake.  I was immediately turned off by all of the sadistic, graphic advice out there on the internet.  Gross.

I re-Googled: “How to humanely kill an animal.”  The best solution I could find was to put Tweety in my freezer.  And there was no way in a million years I was doing that.  That was even grosser.

In desperation, I sent out a plea for answers via Facebook and Twitter.  Crickets.  Apparently, no one wanted to touch that one with a ten foot pole.  I don’t blame them.

I was about ready to give up, when I had an epiphany.  I suddenly remembered the Red Rider BB gun in the garage, a Christmas present from my in-laws.  (Yes, that’s a story for another day).  Up until that point, I’d only used it to shoot holes in pop cans.  And I was pretty good at it, too.

But on this particular day, my trusty BB gun had another use.  Quick, painless and to the point.  And I felt absolutely awful about it.

The whole episode made me realize how sucky it must have been to be George… always cleaning up Lenny’s messes.  And while my story isn’t anywhere near as eloquent as Steinbeck’s, it does have some strange parallels.

Except my story?  Would be titled, “Of Birds and Women.”