You kids don’t know how good you’ve got it.  When I was your age, car rides were a whole different ballgame.

For one thing, we didn’t have air conditioning in the car.  Our air conditioner was the window, which you had to manually crank with a little handle.

Which was pretty miserable on cross country road trips, let me tell you.  Getting blasted by hot air zooming past your head, while trying to keep your mouth shut to avoid bugs flying down your gullet… not fun.  And if someone ripped one in the car?  You had to fumble with that little handle and turn it fast as you possibly could to get some fresh air.

Car seats?  They didn’t exist.  When Grandma and Poppa brought me home from Seattle, it was in an open cardboard box, that they set on the floor of the car.  Can you imagine?

Seat belts weren’t even required.  I remember one summer we drove cross country with my aunt and my two cousins.  Two moms, five rambunctious kids and four suitcases crammed into one little VW hatchback.  The two youngest kids (one of which was me) sat in the very back, crammed into a two square foot area. 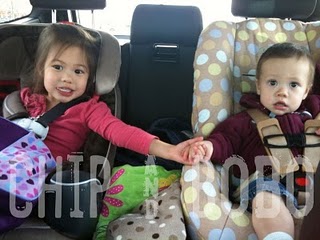 The next time you whine about getting buckled into your 5 point harness, padded booster seat with a cup and snack holder, just remember that, my sweet ones.

We did not have CD players or iPod plugins in the car.  We had an 8 track (I’ll tell you about that one later), and one cassette.  I believe it was “Born Free,” which we listened to over and over again.

On road trips, we entertained ourselves by counting mileposts, and playing I-Spy and license plate alphabet games.  The latter was really not that much fun when driving through the Badlands, and only seeing another car every 20 minutes.

Can you imagine what it was like for your grandparents getting around, when cars navigation systems were not even invented?  What would your father have done?  He would have had to pull out the paper map or, worse yet, stop and ask for directions.

And yet, they haven’t.  I would have thought that in 30 years, someone would have come up with really brilliant, yet simple ideas to make car rides more bearable.

Like a portable potty that would allow us to travel more than 30 minutes without hearing, “I have to go… again.”

Or a clear plastic divider down the middle of the car, so you could look at each other, but I wouldn’t have to hear, “Mom, Chip’s touching me!”  (This, even though your hand is clearly over the invisible middle line.)

Or, better, yet, a clear plastic divider between the front and back of the car so I wouldn’t have to hear, “Are we there… yet??”

I’m guessing the real reason things like that haven’t been invented yet?  Because somewhere along the line, someone has realized that that’s part of the fun that goes with car rides.  As annoying as it is to hear some of the whining and malarkey that emanates from the back of the car, it still makes me smile a little.

It brings back memories of long road trips taken in a simpler time, with simpler cars.  When part of the adventure was not where were were actually going, but getting there.

One day, I promise you, our family will take a cross-country road trip.  I’m actually looking forward to that.

Love you to pieces,
Your Momma (who thinks her parents are pretty much heroes for attempting any sort of road trip with children)

16 thoughts on “When I was your age, we got around by horse and buggy”