We heard this a lot growing up.  I remember rolling my eyes as my parents embarked on yet another dramatization of how good we had it, and how different things were back in the stone ages when they were young.

Now that I’m a parent, I have a lot more respect for my folks, and the insights they provided to us growing up.  And as I hear myself starting sentences to my kids with “When I was your age…”, I realize the undisputable fact:

I am turning into my mother.

Which is a lot less scary than in once sounded.  It’s actually a good thing, because if I become half the parent my own were, I’ll consider it a job well done.

And with that, I’m kicking off the first in a little series of letters I’ve written to Chip and Bobo.  Call it a salute to the generations of my parents, my kids and the one in between.

When I was your age, TV wasn’t even invented

You kids don’t know how good you’ve got it.

When I was your age, we had one TV with 6 channels on it.  No, make that 6.5.  There was one additional channel that came in reasonably well, as long as someone stood behind the television and held the antenna at just the right angle.

Somehow, I always got suckered into being the designated antenna holder.  (Sorry to tell you, Chip, but as the youngest child, you will get the short end of the stick like this.)

But while I was there, I also got to change the channel.  And that sure beat having to get up and walk across the room.  Remotes weren’t even heard of back then; everything was controlled by a dial.  This made channel surfing pretty hard. 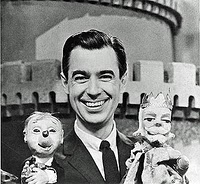 Not that this mattered much, because there wasn’t a lot on for young kids.  We had Sesame Street, Electric Company, and Mister Rogers.  The latter of which I hated, because King Friday really scared me.  Plus, even at the age of four, I thought the cardigan/tie combo Fred sported was a little nerdy.

It’s not like today, where you can flip on the TV and choose between Dora, Imagination Movers and Yo Gabba Gabba.  Or if you don’t like it, switching over to On Demand to see a zillion other choices.  And if you still don’t like those options, popping in a DVD from the vast collection of Disney and Pixar movies.

We had none of that stuff growing up.

And we certainly didn’t have him: 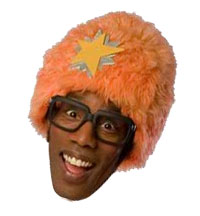 I’m pretty sure he is supposed to be modern day equivalent of Mr. Rogers.  Minus the cardigan.  Which is likely why, at the age of 30-something, he scares me a little.

Can you imagine what it was like for your grandparents growing up when fire television wasn’t even invented?  They had to find other things to entertain themselves with, like playing kick the can (whatever that is) … or reading a book.

It’s no wonder they used to flip off the TV right in the middle of a program, and demand we went outside and got some fresh air.  The nerve!  O, how we whined.

I got a similar reaction the other night when I dared turn off the Backyardigans so we could eat dinner in peace.  The audacity!  The whining!  Maybe things haven’t changed that much in 30 years, after all.

And, yet, somehow you survived.  We finished dinner, then went outside to play and have ice cream.

Then we scooted inside promptly at 7:00.  Because Dora was starting.

Love you to pieces,
Your Momma (Who watches so much TV, she actually sings Barney songs to herself in the shower)

11 thoughts on “When I was your age, TV wasn’t even invented”