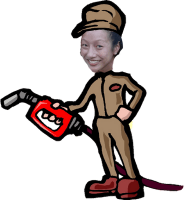 Before I had kids, I thought breastfeeding would be easy.  I equated it in my mind to pumping your own gas.  You stick the nozzle in, you hit the start button, and you fillerup.

The ironic thing about this far-fetched analogy?  I actually don’t know what it’s like to pump my own gas.

Here in Oregon, there’s a gas station attendant that comes out to your car and does everything for you.  Sometimes, they’ll even clean the dead bugs off your windshield and check your oil.  I love living in Oregon.

Obviously, once the kiddos came, I figured out pretty quickly that breastfeeding is nothing like pumping your own gas.

I’ve also grown a profound respect for gas station attendants… perhaps because, on and off, it’s a job with which I’ve become quite familiar.  Here’s what I’ve picked up in my on-the-job-training:

And after a long, drawn out weaning process, this is the position I’ve found myself these past few weeks.  My gas station attendant – and breastfeeding days – have come to an end.

It hasn’t always been an easy job.  The hours can be brutal, and there isn’t an employee manual to doing it right.  Let’s face it, the pay sucks.

And despite all that, I have to say… it’s been one of the best jobs I ever had.  And one I will miss.

3 thoughts on “Fillerup with regular, please”