I knew when I married Jay that he’d be a fantastic husband and, someday, father.  I was right.

But what I couldn’t foresee is the unique skills he’d bring to the table.  For example:

He cooks.  I’m not at all joking when I say he makes the best grilled cheese sandwich I’ve ever tasted.  He also dials a mean Domino’s.

He grooves.  My children have been raised from birth to have a fine appreciation of Bon Jovi, Johnny Cash, Van Halen and a smattering of 80’s one hit wonders.  While his choice of music sometimes makes me want to pull my hair out, it has an oddly soothing effect on my kids.  To this day, the Footloose soundtrack will calm Chip down in the midst of even the worst screamfest.

He does the laundry.  Almost all of our laundry, since the day we were married.  Early on, I learned to not buy anything that was wool or not colorfast.  I also grew to appreciate tight sweaters and the color pink.  Still, this is one of the best perks of our marriage.

He dances.  He’s taught Bobo all the best moves, including the moonwalk and the robot.  We’re currently working on perfecting the running man.  I’m sure her future prom dates will thank us.  Who knows… maybe “old school” will be back “in” by then.

He cleans Booyah’s litter box.  He shovels crap every week, and has never once complained about it.  Lord knows he gets his fair share from me on a daily basis.

He gives the best horsie rides, piggy backs, and laundry basket train rides in the neighborhood.

He brings home the loot.  I can count on one hand the number of times we’ve come home empty-handed from Chuck E. Cheese, the fair, or anywhere with one of those pick-a-prize machines.  He also owns the baseball toss and the basketball shootout.

Jay calls this last skill his “useless gift.”  The result of this talent? 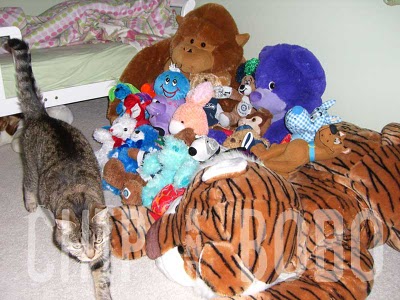 To clarify, Booyah was not won at a carnival, but the rest of the animals were.  As I gathered these up in Bobo’s room tonight, I counted 24 stuffed creatures won by Jay.  Make that 25, including the one he won today at Oak’s Park that isn’t pictured here.

I don’t know how he does it.  But I do know that if they gave out money for winning those, we’d be filthy rich.

Instead, we are rich in carnival prize loot.  And butt rock.  And funky dance moves.

And those are the things you just can’t put a price on.