I got a little crazy with the word clouds for this one.  That’s my inner tech-geek showing through.

Chip’s vocabulary has grown like wildfire over the past month.  Up until now, he’s uttered a few words here and there, but overall has been our family’s equivalent of Silent Bob.  (I guess that would make Bobo “Jay,” minus the swear words… not to be confused with my husband, Jay)

Until recently, his vernacular consisted mainly of ball, uh-oh, dissy (sissy), Booyah (the cat), with his favorite (and first) word being dada.   Here’s a word cloud representation of what his vocabulary consisted of a few months ago:

It probably goes without saying that the fact that he used dada, dissy and yes, even the cat’s name, more than my own made me feel a tad bit like chopped liver.  He knew the word “mama,” but used it pretty sparingly, most commonly after he had just blown chunks.

Well, the month of May rolled around, and brought with it lots of changes.  My little guy started spewing new words left and right.  To illustrate my point: 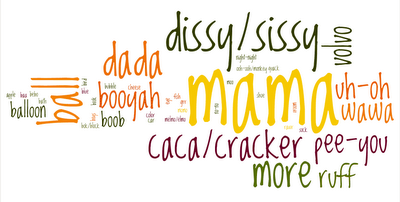 My favorites in this little cloud have got to be:

And yes, I’d be lying if I said I wasn’t more than pleased to see the word “mama” vault to the top of his usage.  To be fair, he actually calls both Jay and I “mama” now.  I’m not sure where the confusion sprung from, but I’m not rushing to correct him.

Let’s face it, I love hearing the word roll off his little tongue.

Cool cloud tags created on Wordle.  There go another two hours of my life.  My love/hate relationship with the internet continues.

2 thoughts on “Cloudy, with a chance of mama”