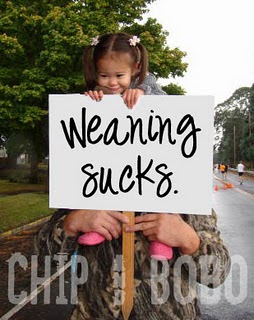 I know, that might be the worst oxymoron ever, but it’s true.

I never intended to still be nursing my son at 15 months; it just kind of happened that way.  My husband and I decided a few years ago that by the time our kids were old enough to walk and talk, it was probably well past time for them to be cut off from Bar Mom.  That’s just what we agreed we were comfortable with.

Only that isn’t how it’s played out.

Chip started walking about four months ago.  And when he said “boobs” the other day (in reference to himself), I realized I had finally gone beyond that threshold I swore I’d never cross.  At that point, I finally started to wake up and smell the breastmilk.

I’ve seen the writing on the wall for quite some time, but it’s just taken me a few months to be ready to accept the truth.  As my husband has very gently reminded me for a while now, “He doesn’t need to breastfeed anymore.  I think YOU need it more than he does.”

He’s right, and I know it.  Did I just put that in writing?

It’s true, though.  The kid eats steak and french fries.  I acknowledge that, not only does he prefer meat and potatoes like his dad, he also gets very little sustenance from me.  I only feed him before bedtime and in the morning, and only for a few minutes at that.

But I relish those few minutes.  They are sometimes the only time of day when I get to spend quiet, stolen moments with just Chip.  Those are the moments when I can pretend he’s still a baby, and not the active, giggling little munchkin who is becoming more boylike and less babyish every day.

Don’t get me wrong.  Like any relationship, it’s had its ups and downs.  There are definitely things I’ll gladly bid adieu to.

I won’t miss things like thrush, wearing nursing tanks every day, or pumping a bottle before we go out on a date.  I won’t miss having to wait until Chip goes down for bed before I have a beer (quite possibly the best silver lining in this cloud).  And I admit I’m a little relieved to be reclaiming the girls as my own.

On the other hand, it’s indeed with some sadness that I say goodbye to breastfeeding.   There are a lot of things I know I will miss.

I will miss having Chip’s little brown puppy dog eyes look up at me.

I will miss staring back into those puppy dog eyes, and watching them get drowsy and finally close altogether once the milk coma sets in.

I will miss the feeling of empowerment and satisfaction that breastfeeding gave me.  On days when I got rarely anything done and barely managed to shower or brush my teeth, at the end of the day, I felt like I had accomplished something somewhat meaningful because I was providing for my son.

I will miss having large boobs.  What no one ever told me the first time around is that once you wean, your boobs not only go back to their original size, but sometimes get smaller.  As if that was seriously possible, in my case.  Mother nature can be so cruel sometimes… she giveth, and she taketh away… and then some.

I will miss the money I save at the grocery store from not having to buy formula.  $20 for a container of Enfamil is highway robbery, I tell you.

I will miss the feeling that my son needs me.  As much as I loathed getting up in the middle of the night, it was also secretly gratifying to know that I was the one he needed, wanted and cried for.  I’m almost scared to blink, because I know soon he’ll be running around like Bobo, an independent four year-old who suddenly doesn’t need her mom quite so much.

And surprisingly, part of me will actually even miss the 3 am feedings.  I will miss falling asleep in the rocker while nursing Chip in the middle of the night and waking up with drool all over me (mine and his), a crick in my neck, a numb butt, and the same sweet little one fast asleep in my arms.

As crazy as it sounds, I think I will miss that one the most of all.