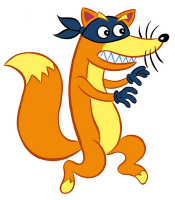 Some days, I think back wistfully to the time when J and I stayed out until the wee hours of the morning, and were able to sleep in until noon the next morning.  Once we had kids, I’ve found that those days are like a mirage in the desert of my memory.

Bobo has always been one of those kids that needed a lot of sleep.  We were lucky in the sleep department with this one; by four months of age, she was sleeping about 12 hours straight through the night.  Even better, she went down for the night around six o’clock, which meant the hubby and I often got some dedicated mom-and-dad-time in the evenings.  The flip side of the coin is that an early bedtime also meant we were often awakened at the crack of dawn.

This trend has continued into her preschool years.  Most mornings, Bobo will wake up around 6 am, and come into our bed to snuggle and watch cartoons.  J is usually up and in the shower by that time, and I’m usually awake, and semi-coherent.

This morning, however, Bobo comes bounding into our room at the ungodly hour of 5 am, ready to rumble.  J sends her back into bed, but 15 minutes later, she’s back in our room, saying she can’t sleep.  Begrudgingly, I move over and make space in between mom and dad for one more.  I flip on the TV and attempt to doze back to sleep.

I’ve just fallen back asleep when a little voice chirps loudly in my ear, “Swiper, no swiping!”  Oops, I forgot that Dora the Explorer is one of those shows.  Seriously, I think there should be a law prohibiting shows that encourage preschool interaction from broadcasting prior to 7 am.  Either that, or I need to take Dora’s lead and start making interactive maps for Bobo… something like “Door…Hallway…Bobo’s Bed!”

One thought on “Swiper, no swiping!”